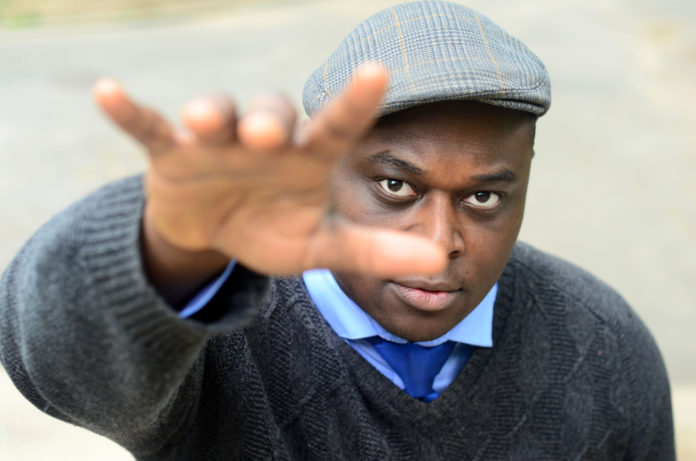 I’m proud to take part in the festival, its really a great experience at IFFNY and people should come out in droves to support this awesome fest.  They ever only have a spectacular line-up on films.

A HAPPY DIVORCE.’ is a multi-cultural drama about confronting your broken parts only to discover that the spirit of something greater resides inside. It deals with how toxic ambition devours love, and confronts our current social epidemic of suicide. Since 2016 In America alone there were 44,965 recorded suicides.

The film is written beautifully by Chase Muratore, and performed with fierce honesty by our leading lady Sita Sarkar. Rory Clarke brings a dignified vulnerability to every moment, and Lakshmi Devy creates a multi-layered performance in such a small amount of time. They are supported by Clifton King, Dave Polgar, Gita Rash, Divya Sethi and over 30 extras. Our DOP Adam Richlin delivered unforgettably vibrant images in as many as 18 different locations.

Personally, I am proud of what this team has accomplished with this film,. It has very heavy themes but or despite, ultimately A Happy Divorce is a movie about hope. We’re super excited to get this one out into the world and pray that it will help anyone contemplating suicide know that that’s not the answer.

In terms of making the film, it started off as an Idea between our EP Patrick Thompson, Chase Muratore, and Myself. It mushroomed into something greater and then strank back down to something meaningful. Like any film process it was an exercise in saying NO to pleasure and YES to pain. Requiring 8 days to shoot and over 18 locations.

I look for an actor’s personal character, passion, grit, and talent, usually, in that order. Honestly, I don’t like to meet the human being in the audition room. What I mean is,  don’t show up and do the Optimus Prime, transforming from YOU into THE CHARACTER. Just show up as the character, do your thing and- deuces! I love that! It sticks in my mind. Like I just met the character in real life! We’ve forgotten the power of mystery; it is a form of seduction and will really help get you a call back if you show up with talent and a solid consistent resume.

Well I can’t give away too much so I’ll just rehash the synopsis, “ Intelligent, beautiful, defiant, Jenny has the courage to follow her desires to get what she wants, but at what price? When our deepest desires lead to emptiness, and we sacrifice those we love, can hope survive? A Happy Divorce deals with the growing epidemic of suicide head on, while exploring the most valuable gift we possess- Life itself.” There you go LOL.

Hell to the yea!! Wouldn’t miss it.

I started back in 1996! I was in a youth program called Pro-TV at DCTV NY and did that for several years then I stopped for like a decade to do community and mediator work, got back into it in 2009-2011 also doing so theatre, stopped AGAIN for 4 years and then committed myself completely in 2015 to the present where I’ve had most of my success. Had I been consistent throughout who knows where I could’ve been by now, BUT so much of being an artist is actually living your life and having a full human experience. That connection has definitely helped my craft. And now I know that the things that are the most personal are the most universal. And I have the courage and the craft to share them.

Oh man you’ll want to go back to the darkest reaches of my memory. Documentary wise it was Called An African American in Russia all the way back in 1998! It was about me looking for this black dude in the Siberian town of Tomsk. They spoke about him like Big Foot! Saying things like “Yes I’ve seen him he comes out at night.”  The film actually got into Sundance and set me on this wild course.

Getting started… a thing in motion is harder to stop the longer it stays in motion, and this is a momentum game. For me I had to stop my chronic procrastination. For a time I couldn’t finish anything. I’d have great ideas, great passion, but no follow through. Just yapping and living in the purity of the dream. What a bum I was.

That was the hardest thing to conquer, learning how to go from the pleasure of the dream to the pain of the work. Basically saying no to pleasure and yes to pain in order to reach my goals.

Once I learned that I was free.

You should never try to define your own style as an artist. I think you can unconsciously limit yourself or worse- try to imitate yourself, becoming a living breathing imitation of yourself. But not your full self. Best to simply just be. Let others define what your style is- just keep doing what you do.

I’d like to say Faith in my artistic voice- in this business everyone will tell you, sometimes to your face that you don’t know what you’re doing or shouldn’t be in the director’s chair, do it anyway. Get better. Never stop learning. Complete things and never quit. No one holds the key to your success but you and the audience.

I currently have 7 other projects, 4 of which are complete and in circulation on the festival circuit. The ones in I am most excited about are:

I’m an associate producer on an animated feature film Written By Ciaran Crampton and Directed By John D. Eraklis called, Pierre The Pigeon Hawk. So far, it stars the voices of Nick Cannon, Whoopi Goldberg, Kenan Thompson and Jennifer Coolidge. And the Producer is Chase Muratore the writer from A Happy Divorce. Here’s a write up the project got in The Hollywood Reporter: https://www.hollywoodreporter.com/news/nick-cannon-whoopi-goldberg-voice-star-pierre-pigeon-hawk-1194155?fbclid=IwAR3TUCcICWdb92SwSbVpG-4tazlp2k35rdzD3hKqTTRSAubHPX_E9Gobauk

I’m in development and packaging the feature film version of The Kind Ones. The short went to Cannes back in 2016 and won the audience award at The New York City Horror Film Festival that year. Also being broadcast on Direct TV. You can view it here: https://www.youtube.com/watch?v=269U0KjhPqQ&feature=youtu.be&fbclid=IwAR10Gg3XD9BwJG59Xj0KxZLkKbRZs9sS4eBcc4QV26hF2i7xIU_CdS3wXhQ

And just to conclude, we’re making our multi-award winning screenplay Mourning Meal into a proof of concept Short Film in order to get it financed into a feature film. It is based on a poem by multi-stoker award winning author Linda Addison. You can learn more here: https://www.gofundme.com/mourning-meal-from-poem-to-film?fbclid=IwAR34Vxf2x5bDjK6QJjWbLZKXmP4g6n0tsmkb-9s-6tJhGZbThdJcvvTupkw

For my other projects you’ll have to wait and see but I’m super excited about them all. It’s a blessed time. God has been good to me and I’m grateful.

We’re taking our projects to market, and pursuing feature film interest, Shows, and Commercial work. As always we’re striving to tell dynamic stories that use darkness to show light, and to prove, if only for a moment, that magic is real.

Thank you for your time.

0
Renowned artist Halil Gashi throughout his creative life continues to leave a legacy that is a nourishment for future generations. His teaching philosophy...
Read more
Film