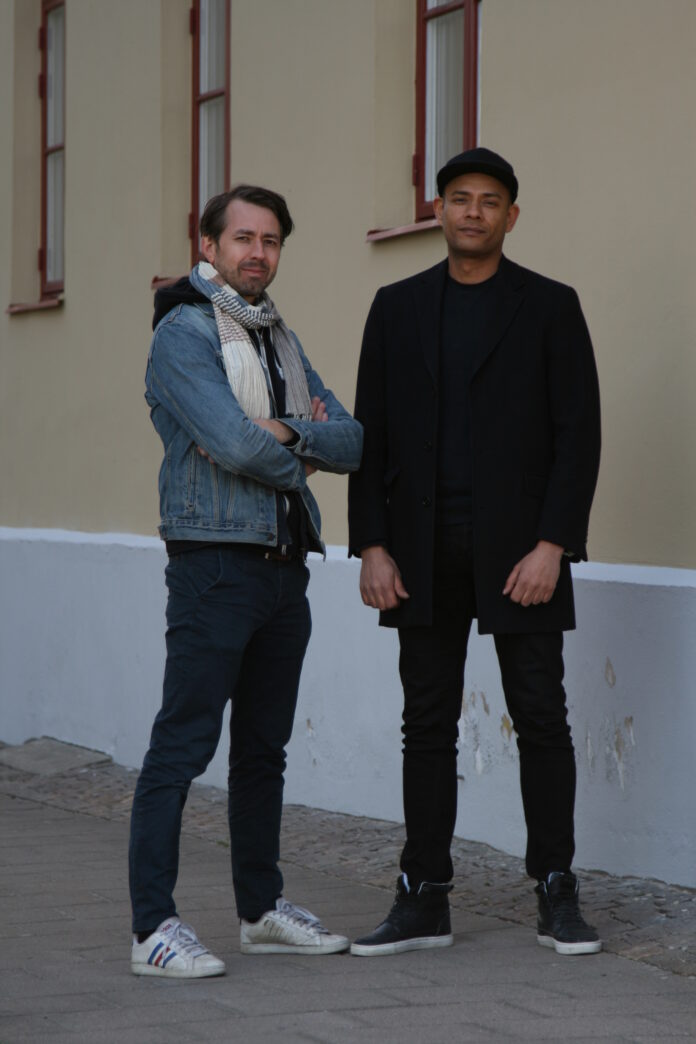 Based in Gothenburg, Sweden, Lars Bergbom and Christian Johansson are two filmmakers with an insatiable love for movies and filmmaking. The duo met for the first time in 1999 while studying media in Gothenburg and have collaborated ever since. The duo has made a variety of projects together raging from music videos to commercial projects. While Christian studied film in Denmark Lars moved to California for the same purpose. Today both of them work as directors at the production company Oddway Film Production. “Without Skin” is their feature film debut produced by the self owned production company Lucy Film.

NY Glam: How long have you been making films and videos?
Lars: I started out making movies quite late in life. I’ve always had great interest in movies and movie characters. I come from a family that really enjoys watching good cinema so I watched a ton of movies as a kid but I never thought that I could do it for a living later in life. We’re talking
Sweden in the 80s here, you either became a carpenter or worked for the government, kind of. I started playing around with super 8 cameras when I was around 18 years old and made my first real short movie at the age of 20. That movie won two festivals in Sweden and gave me the confidence to actually consider the film business as a potential profession. Today I’ve been working in the industry for about 14 years.

Christian: I did some stop motion films when I was a kid, and also a couple of small short films in school, but then I had a quite long break. When I was about 20 I lived in Barcelona for a while and that’s when I decided that the only thing I could imagine myself doing and be happy was to make movies. I went to film school in Denmark in 2003 and continued film studies in my
hometown of Gothenburg, Sweden. Now I have been a professional filmmaker for about 14 years.

NY Glam: What film was your directorial debut?
Lars: My first short movie is my directorial debut. We made a little horror movie that actually had a number of cool and complex effect shots for being your first movie. Elevating demons, books flying out from shelves, furniture moving around in frame, decapitated heads talking, fun stuff basically. It’s of course that kind of movie that you hide in a box in hope that it never sees the light again. I showed it to my son to try and spur him into making his own short film in the future. I don’t think he was so impressed at all.

Chris: I’ve made more commercials than I can remember and some short films and music videos. Most of the short films I’ve made have been about me wanting to learn something, what does it take to do comedy, what does it take to do action or how do you film a fight scene like in “Fight Club”, stuff like that, but I would say that “Without Skin” is my true directorial debut.

NY Glam: What is your recent film about?
“Without Skin” tells the story about Sara, a young woman, tormented by mental illness and self- harm. We wanted to present a compelling and truthful film about the difficulties of struggling with depression. In Sara’s case it all goes from bad to worse when both her best friend and her sister
leaves her, which triggers a downward spiral that she, nor anyone else can control.

NY Glam: How did you go about casting for the film?
We didn’t use a casting agency for “Without Skin”, due to budget constraints. We advertised the movie project on social media, contacted the best acting schools and even went to a few plays in town. We started off locally (Gothenburg) but didn’t find what the movie needed so we
basically advertised nationwide. We had hundreds of actors sending in casting tapes and went up to Stockholm on three occasions to meet actors. We ended up casting Victoria Dyrstad for the lead role, a  brilliant actor and we had the joy of working with some fantastic actors in supporting roles as well.

NY Glam: What was the most important lesson you had to learn that has had a positive effect on your film? How did that lesson happen?
There’s so many lessons we’ve learned making Without Skin and it’s been a really tough journey. In retrospect it might have been better if we did a cabin in the woods kind of movie that more matched our budget but being naïve can sometimes be a filmmaker’s best character trait. The most important lesson is to be overly prepared. You should really over prepare. We planned every single shot with our DP Carl OJ Olsson, we measured locations and used storyboard software so that we knew the limitation when we staged and blocked our scenes. Nine times out of ten things will go wrong when you’re making a movie and for us stuff happened all the time and we often had to abandon the original idea due to technical errors. But
when you’re properly prepared formulating a plan b is way easier.

NY Glam: Tell us a bit about the other films you’ve made and your other projects.
Lars: I’ve made a few short movies to date, some of them shown in festivals in Sweden and the US, but it was a while ago. I’ve spent the recent years writing feature film scripts and directing or shooting commercials. I had an interesting realization a few years ago when I watched my older
short films. Everything I’ve written and directed deals with people living with anxiety or dual personalities that becomes a source for angst. This kind of theme has been consistent in everything I’ve done and can be seen in the scripts I’m working with right now. It was both fun and interesting to take a step back and look at the films you’ve done since you started, tap into
that emotional state you were in and see how you have evolved.

Christian: Without Skin and commercials have been taking up most of my time. In the commercials I make I always try to add a personal touch, something extra, preferably that I haven’t done before. But it can also be a song I really like, a special color palette or a great looking location  The last thing I directed was a 60 second commercial for Volvo Trucks and DHL. Other than that I am in pre-production for several different commercials, and I am also working on both a short-film and developing a couple of feature film scripts.

NY Glam: What role have film festivals played in your life so far?
Winning “best film” in two festivals at the very start of my (Lars) film career was of course of great importance. It became some sort of validation that what you’re doing is good and has value. Other than that, festivals have been a place where we’ve had the opportunity to meet fellow filmmakers and establish new relations with people in the industry so festivals have been an important part of our career.

NY Glam: Is it harder to get started or to keep going? What was the particular thing that you had to conquer to do either?
Both are very hard. In our case we had a quick start but we still believe that getting started is the hardest. Even though we did a micro budget film it is still hard work to get it off the ground. Finding a good crew, good actors, locations and everything you need with very limited resources can be quite intimidating.

NY Glam: How has your style evolved?
Christian: When I was younger I was mostly interested in finding the coolest shots and fast paced editing techniques. Nowadays I believe that I am more confident and effective in my filmmaking. I think more of connecting all the pieces of filmmaking so it works together and elevates the story, color, blocking, camera movement, sound, actors and so on.

I believe “Without Skin” turned out both compelling and beautiful, but there are many things I would have done differently, had I known the things I learned during the process of making it.

Lars: That’s a hard question. Do you ever stop evolving as a filmmaker? I guess I’ve become a more confident director the past years. When it comes to the way I work with the camera I can see a certain pattern or a visual style throughout my work. In “Without Skin” my style brings a kind of art house feel to it but I’m still young, as a filmmaker at least so I need to make a few more feature films before I can define my style.

NY Glam: What has been your personal key to success?
I don’t know if we have achieved success quite yet, but in regards to getting a project off the ground and creating something that has production value there’s only one way to it. Surround yourself with the most talented and ambitious people you can find and never let failure and rejection get the best of you. That’s the way we have approached it and it has worked out fairly good so far.

NY Glam: What are you thinking about doing next?
Lars: I have two feature film scripts that I’m working on right now. One of them is a English speaking single location drama/thriller set in the rural parts of New York State. The script is circling around some potential co-producers right now. It’s a really cool and different kind of
movie that I think our core audience will love. I’m super excited about this project and hopefully we will get the financing in place soon so we can get this movie done.

Christian: A new feature film.  I was writing a small horror film, but then my father passed away about a year ago. So now I have started writing a more personal film about life at its end and how people react when they know that you are going to die. It’s a film about redemption and
about forgiving without ever saying “I am sorry”, about never being able to talk, but realizing that you said everything that you need to say.

NY Glam: Where does your studio want to go from here?
We would like to see a collaboration between Lucy Film and a bigger production company in the future. We’ve had some really interesting conversations the past weeks but nothing we can talk officially about at this moment.

0
Elis Gjoni was born on 1988 in the city of Puka. From his childhood he moved to live in Tirana Albania, where...
Read more
History

The message of Yoga in promoting both the physical and mental health has never been more relevant.

0
International Day of Yoga / June 21 Yoga is an ancient physical, mental and spiritual practice that originated in...
Read more
Uncategorized