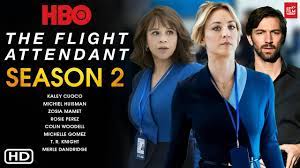 New episodes of the hit dramedy won’t premiere until spring 2022. But in a new sizzle reel for HBO Max, which offers teasers at the programming in the year ahead, Cuoco is featured prominently and looks frequently shocked. And, in one shot, it looks as though The Flight Attendant season 2 could be offering a glimpse into Cassie’s mind palace. Watch the video below.

“Collaboration is the key and choosing your collaborators will elevate your work so much. ” – Larry Manuel