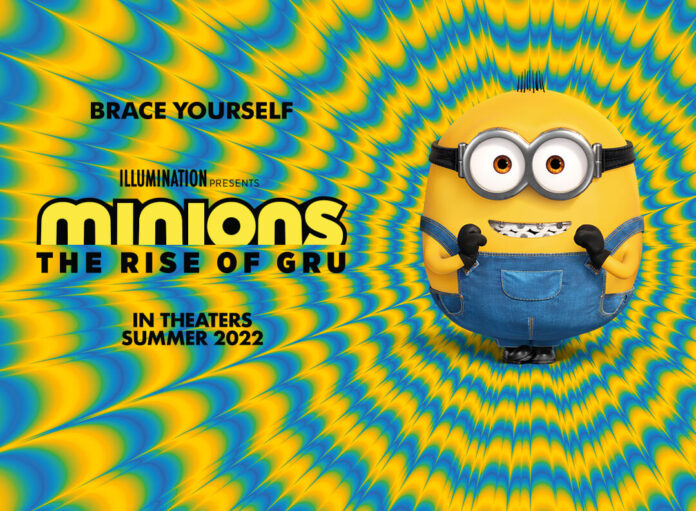 Minions: The Rise of Gru (also known as Minions 2) is an upcoming American computer-animated comedy film produced by Illumination and distributed by Universal Pictures. It is the sequel to the spin-off prequel Minions (2015) and the fifth installment overall in the Despicable Me franchise. Directed by Kyle Balda, with Brad Ableson and Jonathan del Val as co-directors, the film sees the return of Steve Carell as Gru, and Pierre Coffin as The Minions, along with Taraji P. Henson, Michelle Yeoh, RZA, Jean-Claude Van Damme, Lucy Lawless, Dolph Lundgren, Danny Trejo, Russell Brand, Julie Andrews, and Alan Arkin.

Set just after the 2015 film, this time in the early 1970s, a 12-year old Gru is growing up in the suburbs. A fanboy of a supervillain group known as the Vicious 6, Gru hatches a plan to become evil enough to join them. When the Vicious 6 fire their leader, legendary fighter Wild Knuckles, Gru interviews to become their newest member. It does not go well, and things only get worse after Gru steals a precious stone from them with the help of Kevin, Stuart, Bob, Otto, and the other Minions and suddenly finds himself the mortal enemy of the apex of evil. On the run, Gru and the Minions will turn to an unlikely source for guidance, Wild Knuckles himself, and discover that even bad guys need a little help from their friends.

Minions: The Rise of Gru was originally scheduled to be released in the United States on July 3, 2020, but in April of that year, the release was postponed by a year to July 2, 2021; due to the COVID-19 pandemic, and the film remaining unfinished, due to Illumination Mac Guff’s temporary closure in response to the pandemic. In March 2021, the date was postponed again by a further year to July 1, 2022.

0
Gentleman adventurer Phileas Fogg sets out on a quest to travel around the world and back home in a period of 80...
Read more
Film

” I hope to never stop walking through the streets of the cities in my life.” -Marco Cucurnia

“Filmmaking is about telling a story with images… ” Puy Navarro