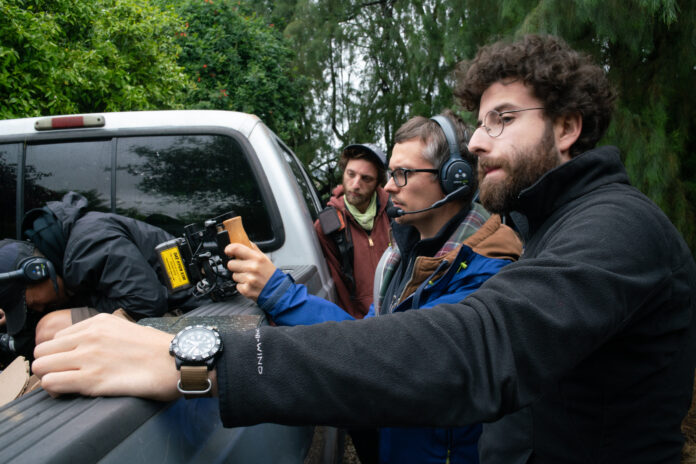 Born and raised in Russia, Mikhail started performing at a local theater at a young age, later on becoming director’s assistant and eventually directing short plays.

Determined to transition into film, Mikhail moved to NYC and graduated from School of Visual Arts. His second-year award-winning short film, “Remember Us”, was picked up by an international sales agent and sold at Cannes Marche du Film, acquiring international distribution.

Since then Mikhail has written and directed several award-winning short films in both Russia and the US as well as developing multiple feature films. One of the features he co-wrote called “Pressed” participated in the 2nd round of Sundance Labs 2020. Most recently, a TV pilot Mikhail co-wrote made it to the Quarterfinals of Screencraft Fellowship competition.

Mikhail currently works as a writer/director in LA.

I’ve started playing around with my dad’s camcorder since I was a kid. I remember after school I’d come home with a couple of friends and we would shoot an “action” film – basically replicating something we’ve seen in the movies or in video games. Besides that, when I was about 5 my parents brought me to a local theater where I’d acted for over 13 years. I guess, my transition to a profession in film was only a matter of time.

Not counting the after-school films, my first “real” debut was a 30-minute short called “Reflection” that I made as a part of my education at Sverdlovsk Film Studios “STRANA” in my hometown in Russia. They had a year-long program for teenagers interested in film and by the end of it the students were expected to shoot a thesis film. “Reflection” was a mystery-drama about a drug addict who one day finds himself locked in his own apartment and has to face not only his addiction but also himself. As I later came to realize almost every director who starts out young makes a movie about drug addicts. It’s like a rite of passage, haha.

“Discovery” tells a story about a father and a daughter who discover the unexpected during their fishing trip. As we grow older we often lose the sense of wonder in the world that was so obvious when we were kids. Yet, the world of wonder is still out there, we just forgot how to see it.

“Discovery” is a truly no-budget film, so my plan was always to cast local. When looking for someone to play the daughter, I had no doubt, I should go back to my theater – I know first-hand how great they are with child-actors. Galina Boyarskikh, was one of children in the youngest group. Right away that little girl blew me away. There’s just something so authentic and charismatic about her — I didn’t think twice about giving her the part.

It’s very important to build a relationship between the adult actor and the child actor prior to shooting especially if they’re going to play a family.  That’s why I brought in, Anton Shlyamer, who plays the role of the father. Anton used to be my director in the theater when I was performing, so I knew him very well. Moreover, he already knew Galina, so she could feel much more relaxed working alongside someone she knew as opposed to a complete stranger.

Big budgets, large crews, new technology – everything is secondary to the story. As long as the script is clear and emotional, you have a chance at a good film. “Discovery” is probably the smallest (in terms of budget and crew) film I’ve ever made, yet it’s one of my favorites. It just felt very liberating to shoot something guerilla-style with just a couple of friends and relatives. I think this more free-flow approach helped to capture the spirit of wonder and definitely made it easier for Galina, who had her acting debut.

My new short film “Bound” had premiered at Oscar-Qualifying Rhode Island Film Festival last fall and still continues its festival circle. It’s a story of a Lithuanian man, Mantas. who has to confront his childhood trauma to cope with his own mortality. Much as “Discovery” “Bound” also stars a child-actor, Gerrison Machado, who plays Mantas in his childhood, while, the adult part is brilliantly portrayed by Mantas Valantiejus.

I have also recently finished a new sci-fi drama short called “Like Us” – a story of a woman who saves an alien that cannot experience emotions. As she tries to teach it what love is, she discovers that you can’t teach what you don’t know yourself. The film is just starting the festival circuit.

There’s nothing more exciting in a filmmaker’s professional life than film festivals. I’ve been lucky to be a part of a few throughout the years – and every time it’s a true celebration of film and people behind it. In broader sense, film festivals – is often the audience you’re making your films for; and a chance to sit in the back row of a theater seeing how people react to what’s happening on screen is worth months of hard work.

Having my film selected for the IFFNY is a real honor and I would like to thank the programmers and the festival staff for an opportunity to show “Discovery” to a wide audience. Especially in New York – a city very dear to me.

With technology becoming more and more affordable, we see unprecedented amount of content pouring into film festivals and online. It’s an old quote, but it’s true that today anyone can make a film. It’s a much different case when making storytelling into a profession. I’m a true believer that everyone has one personal story that they can make into an amazing film, but what do you do for your second project? That’s where the profession becomes about skill, working ethics, perseverance and flexibility rather than pure talent.

Sustaining professional career as a writer/director is by far the greatest challenge I’ve faced that’s why I’m constantly trying to breakdown films and continue my education while creating as much content as I possibly can. My approach is to make writing & directing into a 9 to 5 job and run is as a business.

I think a director’s style is strongly intervened with one’s personal life and self-assessment. For years I’ve been drawn to a more mass-market entertainment as a viewer, yet tried to work in a more auteur style in my own work. That’s what brought me to the American Film Institute Conservatory where I’ve recently graduated from. AFI is structured around classical, auteur approach to filmmaking – that’s why the program is so strong. However, quite recently I came to a realization that I’m far more suited for entertainment rather than arthouse filmmaking. To create a truly auteur cinema – the storyteller needs to have a profoundly unique view on the world and strong message they’re eager to share with the world. I don’t have that.  As soon as I understood that, my work made a huge jump in quality and I found much more peace of mind than before. This is my philosophy now – making films that a wide-audience can enjoy yet utilizing all the technics of auteur cinema.

Determination, strategizing and collaboration. I structure my days very thoroughly – as one would a business: 9 to 5, 5 days a week. Besides that, I have a 5-year plan that I constantly updated – this way I have a clear strategy of where I wanna be and how to get there. Of course, life intervenes, but having some kind of plan shows me very clearly what areas of my personal and professional life to focus on.

As far as collaboration goes – I always try to create the best environment for my team to express themselves. I’m a true believer that “you’re only as good as the people you work with”, that’s why when I find someone I really like working with – I try to bring them on every project I do.

I’m working on another short film that I’m hoping to shoot sometime in 2021. Besides that I’ve been developing two feature films and a TV show.

I have been doing short forms for some time now, and, of course, would love to work on longer forms. Let’s see what happens!

0
All filmmakers from around the world who have produced: feature films, short films, documentary films, animation and music videos in the...
Read more
Film

“Learn to collaborate. Filmmaking is a team sport.”-Montgomery Burt

The message of Yoga in promoting both the physical and mental health has never been more relevant.