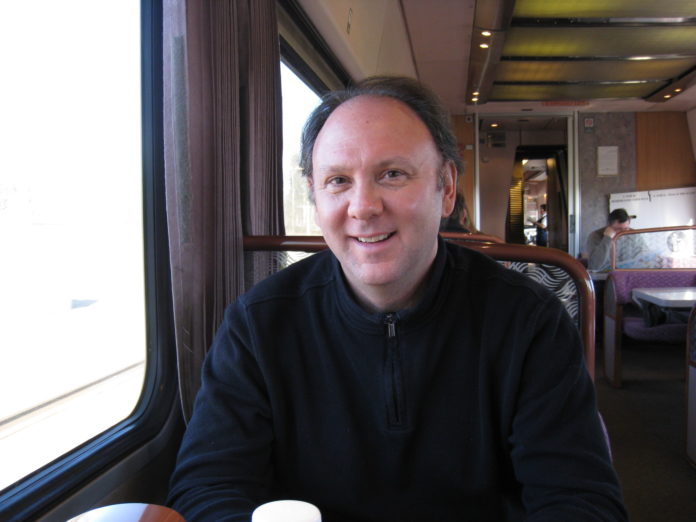 At fourteen, screenwriter Montgomery Burt was making short films with his dad’s Super-8 movie gear and he’s been hooked ever since. In addition to writing the award-winning black comedy screenplay “The Outskirts of Paradise,” Montgomery has completed four feature scripts and written for radio and television. His teleplay “Career Move” was produced for Alfred Hitchcock Presents, and his Twilight Zone script “Borrowed Time” won second prize in a national competition. CKNW Radio in Vancouver also produced his radioplay, “Leonard McTivey’s Last Day at Work.” Mr. Burt received two Praxis screenwriting fellowships through Simon Fraser University, and he runs Upwords, an ongoing screenwriters workshop that develops new talent. He has won numerous awards for his short scripts, including “Dougie Dog,” “Zombie Corp,” “Darla vs. Hockey,” “My New Purse,” and “Other People’s Lives.” Montgomery has those projects in development along with marketing his feature screenplays. A short comedy film he recently wrote and co-produced with director Tabatha Golat, “The United Guys Network,” played at over 45 festivals worldwide and picked up five awards along the way.

On the writing side, I’m nearly finished a short called “Hugh Was Here,” about a nondescript fellow’s last day at the office that goes terribly wrong. I need to workshop it one more time in my screenwriters group, Upwords, before showing it around. On the producing side, director Tabatha Golat and I are trying to raise funds to make our latest film, “Dougie Dog,” a heartfelt comedy set in an animal shelter. We put together a proposal and video pitch that was supported by Film Collaborative in Los Angeles:

NY Glam: What makes a film great for you?

I like to feel engrossed in the world of the characters. If it’s “Goodfellas,” for example, I like going on the journey with Henry Hill as he wants to be a gangster but it’s more complex and violent than he imagined. If it’s a biopic like “Molly’s Game,” or “I, Tonya,” I enjoy experiencing a person’s life unfold and seeing the choices they make. (Bad decisions often make good stories.)

NY Glam: Are there certain qualities that make a film better for you?

One of the qualities I admire is humor. The recent “Ford vs. Ferrari,” for example, could have played the subject of car racing pretty straight for the whole movie, but they used humor that developed naturally from the characters. A unique point of view on a subject is often what makes for a great film. When you think about it, “Drugstore Cowboy” and “Trainspotting” are very similar stories–a guy tries to get off drugs and avoid the toxic people of his former life–but the two films are told in original ways, using lots of black humor. (Both great, by the way.)

I aim for an interesting character with a strong goal. If it’s a short film that goal probably isn’t saving the world from an alien invasion, it may be something as small (but important) as a young girl trying to stop her parents from bickering in the car. I often like throwing ordinary people into a situation that puts them off-balance and see what they do to make things right again. For example, in my script “Darla vs. Hockey,” a newlywed suddenly becomes a “sports widow” and goes to great lengths to win back her hockey-crazy husband.

I think there should be something relatable about the character, even if they are a dark character. My stories often begin with a true event that happened to me or somebody I know, and I extrapolate it. My real estate agent, for example, told me about a woman she caught stealing personal items from open houses and I explored what would motivate somebody to do that in “Other People’s Lives.”

I loved being involved in “The United Guys Network.” I wrote the short comedy script and director Tabatha Golat and I got funding from Telus StoryHive. It was a great experience being on set, a privilege most writers don’t get. I learned so much from seeing Tabaha in action, working with our cast and the crew. She created the perfect upbeat atmosphere for a comedy. We were a small team–only about a dozen of us in front of and behind the camera–but we all pitched in and got it shot in three days. For me, it was like going back to school. Seeing the actors interpret my material was mind-blowing, inspiring me to write more specifically for them. Ultimately, their performance is what ends up on the screen.

I enjoyed writing “Dougie Dog,” a heartfelt story about a dog dropped off at an animal shelter who is desperate to break free. My wife and I have volunteered at our local SPCA for nearly 20 years and Heather and I often wondered what the canines were thinking about their experience there. That was the inspiration for a prison break story, told from a dog’s point of view. When I showed it to my director, Tabatha loved the story and we’ve been trying to make the film since.

I enjoyed writing the horror-comedy “Zombie Corp.” I commute every day on Vancouver transit and while I’m on the train I write down story ideas. They usually are little idea fragments and bits of dialog that need much work shaping them into a script. This story, however, emerged practically whole and I wrote it in an afternoon. After three more drafts and workshopping it twice at my screenwriters group, it’s gone on to win numerous writing awards. Hopefully, making the darned thing will be just as easy.

I love music as much as film. I have a huge collection of CDs in a variety of genres—blues, soul, gospel, rockabilly, Cajun, Zydeco, Tex-Mex, Cuban–you name it. I love how music creates a certain mood and often tells a story. Especially with blues songs, you can’t beat those cautionary tales from a well-lived life. For “The United Guys Network,” we licensed a blues song from harmonica master Harpdog Brown and it was perfect for the film.

I don’t play an instrument myself but I use a lot of music structure and emotional directness in both my writing and editing. I work as a news editor at Global BC and I love taking the material a cameraman has shot and shaping it into a story. It’s a two-minute slice of life told for a 6 o’clock deadline. Fast art. I’ve done this job for many years and still enjoy finding out about other people’s lives. (Yesterday, I worked on an item about a 16-year-old experienced mountain climber who fell and survived a 400-foot fall at Mount Hood, Oregon.) I also thoroughly enjoy working on longer, documentary pieces that take more time and creativity. Really, at the end of the day, it’s all about storytelling.

Learn how to tell a good story. Audiences are attracted to compelling characters in conflict doing interesting things. Take more time than you might think you need to work on the script because that’s the foundation for everything to follow. It was Hitchcock who said, “To make a great film you need three things: the script, the script, and the script.”

On the business side, network as much as you can because you can’t do it all yourself. I’m an extrovert but many writers are more introverted by nature so get out there and find others in the business. Team up with talented people to accomplish great things.

Focus and follow-through. Too many people are great at starting projects but they lose interest along the way. Or they do finish the script (or film) and they fail to promote it fully.

Don’t believe the naysayers and doubters. Many of your friends and family will give reasons why you should be selling plumbing parts instead of filmmaking, but don’t listen to them.

Have somebody in your corner. Through all the ups and downs, two people are my most ardent supporters, my Aunt Lois and my wife Heather. I would have given up years ago had it not been for them.

Learn to collaborate. Filmmaking is a team sport.

Learn to take feedback and learn from that feedback. Set up a writers group and watch how you magically all get better.

Make time to write. It’s so easy to come up with reasons not to write. I know life gets in the way sometimes, but nothing gets done until you apply butt to chair.

NY Glam: Where can everyone keep up with you to learn more? …social media…website?

0
What was the most significant decision in shooting Parivara?

Alex K. Rojas: For
me it was sharing the children’s stories and...