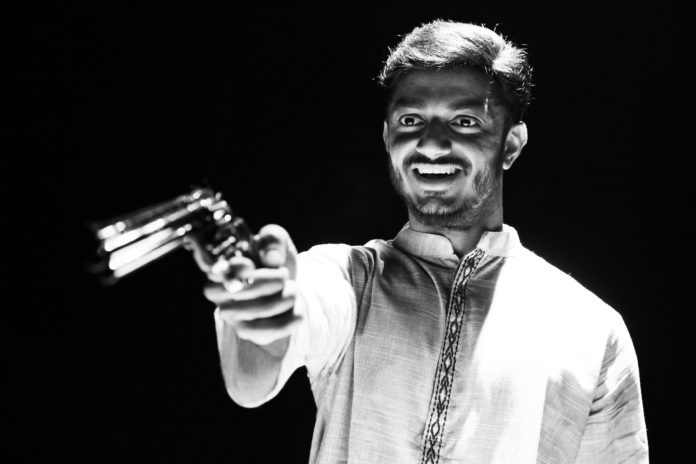 Thank you. It’s a great honor to have been selected, especially considering I’m the only Bangldeshi here this year. So I started writing “The doGs Illusion”, right after the theatrical run ended on my second feature film “Raian”; and the reason for doing a short instead of another feature had to do with the special screening of “Raian”, I had towards the end of 2017 in this very city! After seeing the audience reception, I knew I had to take a chance on myelf and see if I could make something from the ground up that resonated with those outside of my home country.

“The doGs Illusion”,  is my first short film. It has nothing to do with dogs, the word doGs in the title is actually an anagram for gods. That being said, the film is not relgious. I knew from the start that it had to be all-encompassiong, in one location and we had to book the largest set in the country for that. I was adamant against using green screen for this as the depth you get from shooting naturally is unparalled. I painted a framework for the audience to discuss; there is no particular color or shade that I’m looking for. We think about black and white in terms of good and bad – the principle of yin and yang. I don’t believe in the idea of art for art’s sake. I am deeply invested in the belief that good art should make us less moralistic and judgmental and, should be a supplement to faith in terms of developing our reserves of kindness towards humankind.

I knew from the start the demigod of darkness had to be played by Sohel Rana, a living legend in Bangladesh, there was no question about it. Having worked with him beforehand I knew he would be open to doing the part if the script was good. As for the demigod of light, I had to put myself in his shoes literally as during casting no one else was able to bring in the off-center acting the character demandeded. If you want a job done right, you gotta do it yourself.

Not wanting to go into spoilers I’ll stick with the basic overview:

A man without a mustache sits down to discuss the ramifications of the Liberation War with a ghost denied his homeland. The ensuing conversation turns into a conflict of race, identity, human nature and philosophical taboos; whilst another comes to service.

I’ve always maintained film grammer to tell my stories and I make it a point to break it only to make a point. I wanted to touch on the fantasical elements of the narrative without using traditional modifiers. Instead opting to use the language of film to focus on errors that can be interpreted as expostion. That’s when a bit of tiredness, a bit of temptation starts to kick in. I do not plan on becoming comfortable with my work and reaching the apex is nigh impossible.

Absolutely, I love NY and any reason to come here is always a great pleasure. I hope the audience here loves “The doGs Illusion”, as much or more than the other premieres I’ve attended so far. My second short “the silence of KNOWING”,  has already been selected at IFFSA Toronto and I am waiting for my passport to return from the VAC. Hopefully I’ll be able to attend both festivals and get a few weeks off from my day job at Far East IT Solutions, where I work as the creative director.

Officially, I got my director’s license with the release of my first feature film Odrrisho Shotru back in 2014. I was the codirector on that project, picking up the lead in post-production. The less said about it the better. I’ve been making home movies since 2003, I remember the resolution of my first camera being less than a megapixel and I used to edit in windows movie maker. Those were the days! Even back then I wasn’t much of a preacher; making grand statements was not my thing.

I personally like to think of “Raian”, as my directorial debut. A director is the captain of the ship! While others help you in achiveing your vision, it is upon the director to maintain the throughline. At the time of “Odrrisho Shotru”, I was the youngest licensed director in Bangladesh; the only way I could get a feature off was to work jointly with another director. I’ve always worked better alone but you got to do what you got to do to get where you want to be. “Raian”, started off as a featurette that ballooned into a feature with the budget staying the same. So it was a matter of maintaining the cinematic feel throughout without giving away to the audience the piecemeal nature of the production. This was quite difficult as most storytellers take the exposition route.

I make movies first and foremost for myself and while that philosophy does not gurantee a film that will be loved, it does gurantee a work with spirit. And sometimes this spirit has never been seen before. That to me is worth striving for. I played it safe with my first feature and while it is a fair film, it’s not me. You can see the difference in “Raian”, even with it’s smaller budget. I’m happy to report that the film was successful in the sense that I got to express my artistic vision and it brought me to New York! It’s important to keep the bigger picture in mind while working.

It’s always the hardest to get started. That first step is everything. And in the middle of everything, motivation does start to run out slowly. That’s when commitment and persistence is key. Life is mostly made up of failures, so when success does finally happen it should not be a cause to slow down.This process cannot be a one off either, you must teach yourself to do it again & again. And with all of the failures I’ve had, it’s a philosophy that’s kept be going.

I’ve grown as a person over the years and that clearly showcases in my work and I don’t mean that on a technical level. There’s always going to be a sensationalist aspect to cinema but I try to ground the key components in my stories to reality. The theme of misery has always been a constant for me; I have no particular say other than painting a framework for discussion.

Success is a relative term and while I’m thankful to have come this far, I wouldn’t describe myself as successful. What I can tell you is that I never back down from a challenge. As long as I’m not putting myself in danger, I get back up from my failures of which I’ve had many. Now failure is something I can share a lot about. Take that to be however you see fit.

We’re already in the pre-production stage of my next feature. The working title is “Fi-re Asha”, which basically translates to Homecoming . For a short time shorts were the language I chose to speak in,  pun intented. I’ll be back when the time is right. Being someone that’s still learning to this day, together with submerging myself in the writing process has made acting a possibilty.

I believe that everyone in this wolrd has something they’re good at. For me that’s filmmaking. I knew from a young age that I wanted to be a director. This isn’t something I realized midlife. It is what I do best. I’d love to do more international work as the film industry in my country is very small and limited; language isn’t a barrier for me so I’m open to relocate for a production.

0
Happy mothers day to all the wonderful mothers out there The origin of Mother’s Day as we...
Read more
History

“Freedom is not a gift bestowed upon us by other men, but a right that belongs to us by the laws of God and...

0
International Day for the Abolition of Slavery - December 2nd On December 2, 1949, the UN adopted the Convention...
Read more
Film