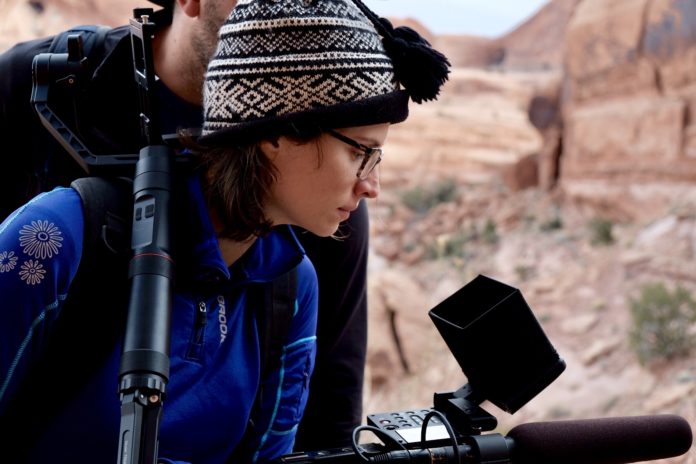 Katherine’s love for storytelling started in the theater. She grew up performing at camp and in plays at school. At sixteen she directed her first play at the Bethesda Writer’s Center and by nineteen she was a board member of Wildwood Summer Theater where she oversaw 6 seasons of musicals. Dedicated to storytelling Katherine sought out intensive theater study earning her degree in Drama through a combination of Ithaca College, the Eugene O’Neill National Theater Institute and the St. Petersburg Imperial Arts Academy. Katherine learned filmmaking by pairing with a cinematographer to shoot narrative film in found spaces around the DC area including an abandoned paper mill in upper Maryland. During a decade in Hollywood and NYC Katherine continued to hone her filmmaking skills focusing almost exclusively on women in title roles. Her most recent film, a documentary profile on aerospace engineer Natalie Panek is winning awards in festivals and is screening internationally.

My film, Space to Explore, is about being the first astronaut to set foot on another planet. It hasn’t happened yet, but the Mars Generation will make it. The film follows aerospace engineer Natalie Panek on an adventure to the red rock terrain of Moab, UT. She is one of the designers of the ExoMars Rover 2020 so she thinks up a lot of fun ways to explore the area. But, she also details some of the struggles that she’s faced as an astronaut candidate.

I read about Natalie in an inflight magazine. I thought she was dynamic and inspirational. I wanted to be like her in many ways. An adventurer, a woman at the top of her field, someone pursuing her biggest dreams.

I wanted to give everyday explorers a taste for what space travel, particularly planetary travel, could look like. Moab has this gorgeous red rock terrain that absolutely lends itself to day dreaming about Mars. My Director of Photography, Peter Horn, and I worked on a lot of ideas to remind the audience that the land we walk on is a planet itself.

I’ve been telling stories for a long time but I started filmmaking about ten years ago in whatever spaces I could find: the forest, an abandoned mill, my bathroom. Maybe those beginnings have lent themselves to my interest in environment and atmosphere.

It’s hard to answer a question like that. When do directors ‘arrive’? Most of us have probably been messing around with equipment and stories for a long time before we get noticed. The first thing that I showed to the public was The Challenge Coin – a story about two sisters who grew up in politics and their attempt to find a deeper connection with each other.

I learned about business. I grew up an artist but I moved forward in my career as a business woman. Learn email etiquette, learn how to make an ask, learn how to make a sweet PowerPoint pitch, learn how to build your website, learn how to hire good people. We are often taught the art of the industry and not the business. Women often do not participate is mentorship culture the way that men do and have for decades. Find your mentors, be intimidated by them in the right ways, and figure out how to learn from them.

There’s a moment in filmmaking where you just feel like giving up. Scorsese puts it perfectly, “If you don’t get physically ill watching your first rough cut, something’s wrong.” It was a great moment for me when I realized that all filmmakers go through this pain. It’s such a challenge taking months of imagination and reconciling that with what you’ve shot. It’s a tough transition but you come out the other side excited for what you’ve created and ready to raise it into the film it’s meant to be.

I am so interested in subtle feeling and emotion. That hasn’t changed but I think my ability to frame those subtleties in the arch of a larger story has matured.

Longevity and identity. I was so nervous moving from LA to NY and accepting a job at a hedge fund. I was worried that I wouldn’t be an artist anymore if I wasn’t broke, scrambling, and sacrificing all comforts to try to break in. But, I am an artist. It’s my identity and it isn’t going to stop even if I make more money, or have a family, or settle into a home. If I am always working for the next project and always exercising my artistic muscle, then I will always be succeeding.

I have a narrative short that’s in post about two women at odds in the workplace. I am so fascinated by women and I’m always looking for story that could highlight someone exceptional.

My studio is me. I am my brand. Katherine DuBois Films. While the stories that I find myself have a certain satisfaction I’m also looking forward to diving deep into stories that others bring to the table.

0
For some celebrities, this moment away from the public eye has been a much-needed break. They’re not going to say they’re...
Read more
Business

0
Business and sports have a lot in common, they are both demanding, competitive and require a strong mindset. World class athlete...
Read more
Film