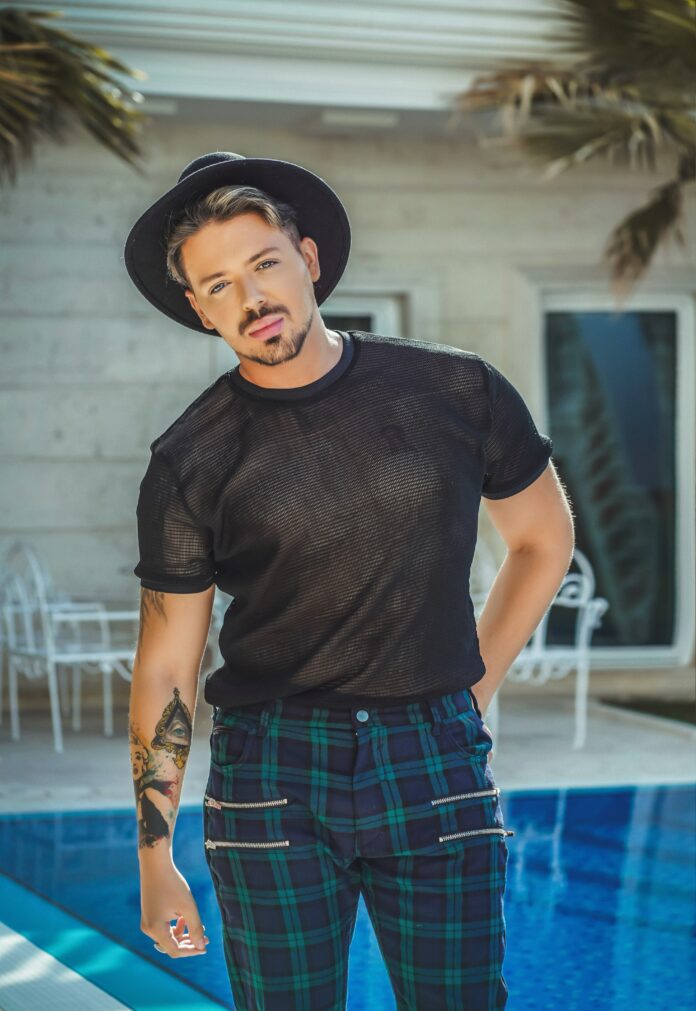 Finding success as a musician is a dream that many artists chase after. For the multi-talented Tirana-based creative Stefan Marena, the road to success came from humble beginnings. Stefan started singing for the church choir when he was a child. He got a jumpstart when he participated in popular talent shows in Albania such as “Gjeniu i Vogël” (The Young Genius) and “Teen Music Festivals” in Albania, Kosovo, and Montenegro.

Hi popularity took off as a teen with talent and reality shows like “Star Academy” produced by Zana Cela of TV Klan, where Stefan was a finalist, only 16 years old. At 15, he volunteered in the “Shpresa” project, for the summer tournament in concerts for children with special abilities.

Stefan Marena’s vocal range quickly propelled him to prominence. His move to mainstream success happened when he was chosen as semi-finalist for the “Festivali i Këngës në RTSH Fik 48” (RTSH Song Fest 48) with the song “Retë s’na ndajnë,” a composition by Roland Guli. Stefan Marena was also the semi-finalist in the famous show “Top Fest” on Top Channel with the song “Refreni i ndjenjës tonë,” a composition by Adriano Rama and lyrics by Agim Doci. Stefan already had fans when he appeared in the talent show “The Voice of Albania”.

With the first prize winner under his belt from “New Voices” of Albania, Stefan Marena started to make appearances in musicals. He was the principal actor in “Romeo & Juliette,” “Notredame de Paris,” and “Les Miserable,” musical projects organized by reputable producers Adrian Hila, Pandi Laço and Bledi Laço on TV Klan.

Stefan continued his successful television appearances, with the participation at the “Kënga Magjike” festival with the song “Kape,” with music by Adrian Hila and lyrics by Ronela Hajati.

In 2018 he published his debut music video for “S’ma Fale” made in Macedonia by director Daniel Joveski, a musical production by Briz Musaraj (Tull Production) and lyrics by Ronela Hajati. The following year, in 2019, Stefan won “Best New Artist Award at the Gala Awards Ceremony “Golden People Awards” and “Luxury Global Awards” in the top 100 most famous personalities in the world held in Baku, Azerbaijan.

Stefan Marena studied Theater Directing at the University of Arts in Tirana.  His true passion is music and acting.

Tell us about your career as a musician. How did your career unfold to where you are today?

Stefan Marena: I started music when I was very young, around eight or nine years old. I never thought about becoming a famous singer in the future.

Since early on, I was part of the children’s group that sang at the church choir. At the time, some musicians and music professors heard me sing and suggested that I take part in talent competitions. I followed their advice and started winning third place prize, and then second place prizes, and with time, hard work and dedication, everything started growing into my music career.

I took part in international competitions outside of Albania, including Montenegro and Kosovo. Growing up, I was very passionate about writing poems, taking photos, and drawing in my free time. I always liked to express my creative side in different ways. Sometimes life brings your way amazing things, that you never imagined. But I believe that talent is what represents our individual identity and sets us apart from others.

How would you describe your current sound and music?

Stefan Marena: My current sound and music it cannot be described in words because I always try to express my soul’s feelings and energy through my music. I am very selective in the projects that I publish and create.

When I release a project, I have to be totally inspired, with the aim to give a message to the people who listen to my music. I try to put all the colors of my feelings into the sounds of my music so everybody who listens to it for the first time feels the same emotions expressed in the song.

I like to bring in every project a little retro and also avant-garde pop culture elements. I believe music is the food to the soul. It is the “creation” that makes u fall in love without looking into someone’s eyes.

Stefan Marena: Actually, I just finished the popular “Festivali i Këngës në RTSH 59” (RTSH Song Fest 59) where I participated with my newest song “Meteor” which is an up-tempo retro pop/dance. The song is produced by the well-known Albanian producer Gramoz Kozeli.

This was an incredible experience to be in the biggest festival in Albania that choses the country’s representative for the Eurovision Song Contest. We sang and performed with the dancers at the big stage, outdoors at the city center of Tirana. We finished the show successfully and it was fantastic.

The whole experience for me was amazing. I am thankful for all the new fans that I gained from all over Europe. I am happy with all the positive reviews that I received.

I believe my next project will be releasing the music video of my song “Meteor” and why not an English song to be launched for the international playlists. My dream is become a worldwide known artist.

What has been a career highlight so far?

Stefan Marena: I would say that my entire life has been a highlight. I am truly blessed, I have a fantastic family that has always supported me and has been invested in my dream and music career. This is such a blessing.

I gave my 100 precent and did my best in every competition or show. Every experience for me has been a learning opportunity for new things. To me success is working towards your dream and achieving your goals.

I would like to mention my participation as principal character in some of the world’s most known musicals such as: “Romeo & Juliette,” “Notre Dame de Paris,” and “Les Misérables.” It was such a privilege to be selected and to perform popular songs from the show, with top Albanian artists.

What’s your favorite piece of music and why?

Stefan Marena: Mostly I listen to music depending on my mood. I don’t particularly have one favorite music playlist because I like different types of music. During this time of the year, around Christmas and New Year, I like to listen to jazz and classic music. My favorite piece at the moment is “4 seasons” by Vivaldi. It gives me such positivity and very good vibes.

What are your main inspirations and greatest influences?

Stefan Marena: Before I write a song, I need to be inspired. I find inspiration in nature, the energy connection that I get from the moon, the night sky, the sunset, and the sea. I like to go in high places and look at the stars and the moon.

What cities, stages, concerts have you performed at?

Stefan Marena: During my artist career I have performed in many stages, theaters, festivals, Television shows and various cities.

In Albania I have toured all over the country with the “Star Academy Tour” including Tirana, Shkodra, Lezha, Fier, Vlora, Pogradec, Saranda, Durrës, Berat. In Kosovo I have performed in Prishtina, Peja, and Prizren and in Macedona in Ohrid.

In Montenegro I had the opportunity to perform at the “Summer Festival” in Tivat, Budva, and Podgorica. I have also performed in Croatia in Zagreb, Dubrovnik, and Split. My performances in Italy include Roma, Firenze, Asti, Torino, and Milano. In Spain I have performed in Barcelona and Madrid.

Are there any artists you would like to work with? Do you have any favorites?

Stefan Marena: I think music collaborations among artist is a good idea because they bring together different music cultures mixed together and this can result in special and beautiful music for the audience. What attracts me is every element in the music that makes it a masterpiece that makes you want to listen to the song over and over again.

What do you consider your biggest accomplishments in your artistic career?

Stefan Marena: I have been in a lot of popular projects and I am continuing to work hard to bring for my fans my upcoming future projects. I am happy for all the support and love I have received from many people on m social media, who are supportive of my art and my message of art. Success for me in my artistic career is to truly connect with people. I like to treat art like a source that transmits good energy, motivation and emotion to my audience.

How many albums/songs have you releases so far?

I would love to make a collection album for St. Valentine’s with a compilation of all the songs I have released until now.

Stefan Marena: I have many hobbies. My bachelor studies were in Acting and Directing because I love to sing, to act, and to dancer. This is just one side of me.

I am also very passionate about parfums, business, marketing. I like to take pictures. I love fashion and modeling as well. I like to travel and explore new cultures as well.

I like to volunteer in charities and motivate others to help. One of the causes that I support is animal rights.

Do you think image is more important than the music itself?

Stefan Marena: Image is fifty percent important in every field of life. Before you sing or you talk the image is what represents you. I cannot say that it is more important, but it has the same importance as the music or every talent. An artist has to be the whole package, including the good looks. But you cannot impress the audience with only good looks. If you don’t have talent and ambition to succeed, then the looks are no good. Every element that is part of the individual identity should complete the total image of the artist in proportion.

How do you see your role as an artist and as a TV personality?

Stefan Marena: I see my self-involved in various artistic projects because I can see myself fit in different art genres. Art is the way I can express myself so studying for acting and directing helped me to learn how to fit in various roles be it drama, or comedy. The lessons I learned from acting I have applied in my life as well.

Life is full of surprises and you have to learn to live in a community and to be positive for every surprise life gives you. We should be opened for every possibility. I think everything happens for a reason. It it’s not a blessing is a lesson.

What types of projects do you see yourself involved with in the future?

Stefan Marena: My future dream is to be in musicals and to play in movies. If I had chosen a different profession besides music, I would have chosen either business, marketing or political science.

I don’t like to plan because future is full of surprises. I can prepare myself the projects that I like the most, but life can bring me projects that I never thought of before. I am open to different project ideas that are related to art and beyond.

In the future I see myself getting involved in acting, music, fashion and why not be in a talent show as a singer, actor, or moderator. 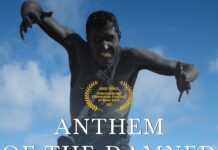 Aaron Mak, Filmmaker with Multiple Talents: A Taste of Cinema 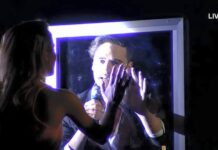 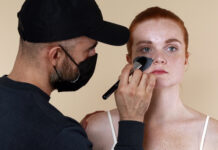 0
Veronica
R. Tabares is
a writer by day, and by night. From novels and screenplays to picture books,
she is known for her witty style...
Read more
Uncategorized