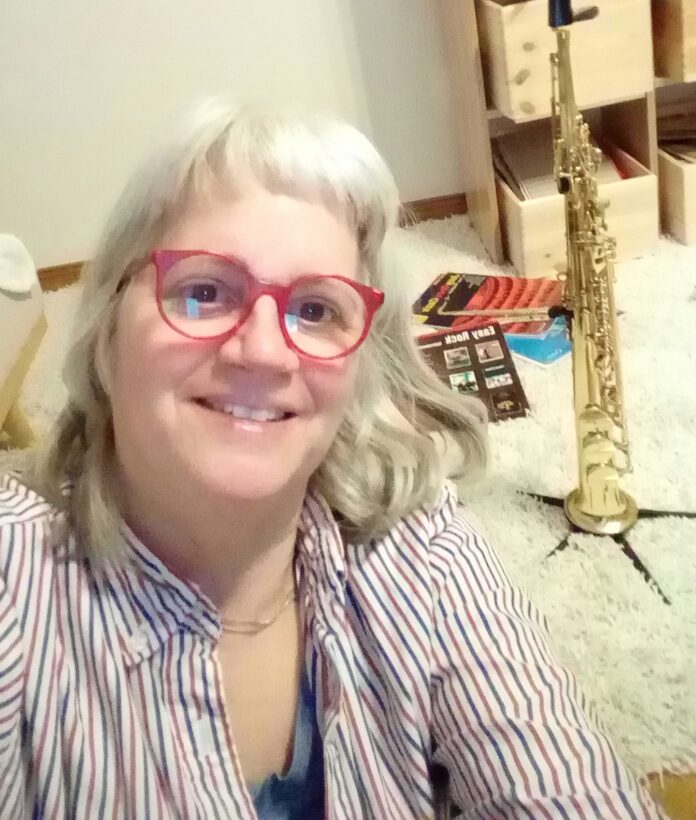 Amanda Leonore was born in Mexico and brought up in Los Angeles. She had private lessons as a painter and singer with her grandmother Claire Trevor. She also studied saxophone, painting, and photography with a number of her grandmother’s friends starting at a young age. Amadea graduated from the New England Conservatory of Music (BM, MM) and from Brandeis University (BA, magna cum laude). She did her post graduate studies as a member of the opera program at the Harlem School of the Arts under the direction of Jeffrey Middleton and Betty Allen. Amadea (JJ) plays the soprano, alto, tenor, and baritone saxophones. Her singing voice has been categorized in Italy and in Los Angeles as a Contraltino (Contraltino/female tenor voice). Amadea’s paintings are hanging in the Jewish Hospital in Berlin. As well, she has been featured as a singer in a film from the London Biannale which was shown in the Tate Modern (London) with David Medalla and Adam Nankervis. Amadea is currently editing her first autobiographical work which covers a six year period of her life when she was living in New York City and Asissi (1994 – 2000). It is called Unmasking Susan Andrea Smith. Amadea has been living in Berlin, Assisi and in other parts of Europe since 1999.

When I was a very young child my grandmother took me to hear a few jazz concerts of a friend of hers – Eugene (Jugs-The Boss) Ammons in Los Angeles and Chicago. I loved the concerts and his playing so much that I told her that I wanted to be a saxophonist. Although I was only a child  Jugs agreed to teach me. I studied with him until the year that he died in August of 1974. I also worked with many of my grandmother’s colleagues in the film industry. All of this affected me very positively as an artist.  My training as a musician has also had a huge influence on my development in other artistic genres, such as photography and painting.

NY Glam: What is your experience shooting with different tools?

My first photography teacher had me working with a Leica Think Camera. This was great because  I was really forced to get a feel for the camera by trying stuff out without any dials or electronic devices or what-not. Because of this early experience with analog cameras I actually prefer them to digital ones, especially when it comes to portraits.

Recently I am shooting predominantly with analog equipement. I am using the Pentax K1000, Pentax Spotmatik, and the Praktika with 35mm, 55mm, and 85mm lenses with f/1:1.2 focal range.

I am currently working on the script and photos for my own autobiographical piece which is called:Unmasking Susan Andrea Smith.

I helped to write the English version for the script of the film „BrückenKunst 2019“ which I made with my friend Gilbert Brüning. I also am playing the saxophone for the sound track of this film. I think that the script is cool.

Gilbert and I decided to use natural light and a natural setting for the film. I was invited as a photographer to the exhibition so that I could photograph all of the artists. Using my Pentax K1000 and several lenses I hand held the camera and took as many portraits as I could in a two hour period.

For me, I try to picture myself in the position of other actors before I shoot the photograph or the film. I also like to capture subtle emotions from the actors in the films or photos that I am shooting. This is the real beauty of the shot. It also encourages the actors or subjects in the film to be less self conscious I think, because I really care more about what the photo speaks to the audience than about how attractive or even sexy the actor or actress might be in the physical sense.

Photography, painting, live music and studio recordings with the saxophone.

Readings through the scripts and talking to friends.

NY Glam: Is there a film or filmmaker that inspired you to pick up a camera?

I writing the script for a autobiographical work which incorporates three films within the novel. I finished writing this script in a four months period; the editing process is now in the last stages and should be finished by the end of this coming May 2021.

NY Glam: Do you ever think of directing someday?

NY Glam: What are some of the projects you are working next? Who are you working with?

I am working with my friends from New York City and Los Angeles who are already experienced in the Film industry. We are in the beginning stages of accessing my script.

“I keep growing and evolving with every project I do.”-Einat Propper