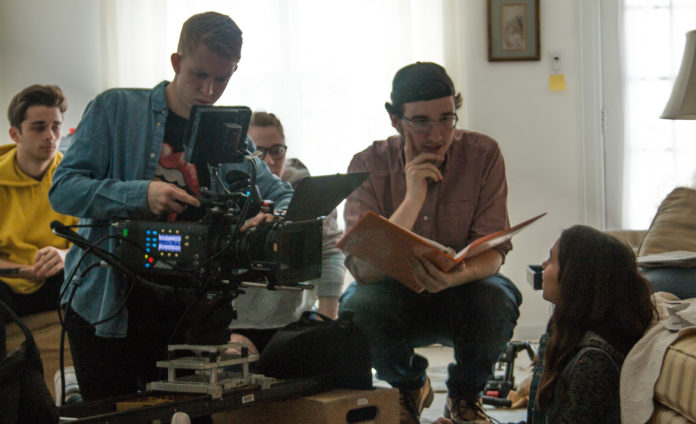 I first started cinematography in college working on projects for friends. Since then I got to meet alumni and grow my role in the camera department. My network has expanded from there.

NY Glam: What is your experience shooting with different tools? What are you to go to gadgets?

I always have a Leatherman on my belt. It usually takes care of 99% of the issues that come up on set. I also carry a multi tool made by Red Camera called the sidewinder that includes a set of hex and driver bits that fit most of the screws used in digital cameras these days.

NY Glam: Which specific requirements did you have to take care of when choosing your equipment?

Picking equipment for a project is a mix of choosing what we can afford to rent vs what kind of equipment works for the scenes we have to film. Since we made Jack turbo in college we used the schools equipment free of charge. That year the school had just acquired two Alexa Classic cameras and a set of lenses for them. The Alexa has been used in almost every Hollywood movie since digital cinema cameras were introduced and there’s a reason for it. The images it can produce have rich and deep skin tones and a film-like quality to the highlights and shadows. I was blown away after seeing the quality of the files for the first time. When it comes to picking lighting equipment LEDs have become the bread and butter of indie filmmakers. They are cheap and can offer a high output and color quality now that the technology has gotten better. In addition they have lots of compact form factors that make using them in small spaces ideal. But for Jack Turbo, we stuck mainly with HMI and Tungsten lighting since that was what was available to us. I like the way tungsten lights can bring a lot of warmth in skin tones, it’s something that LEDs haven’t quite caught up to yet. Darcy and I felt like the script didn’t call for any flashy camera moves so we didn’t worry about finding any jibs or cranes to put the camera on.

I’m midway through production on a short film about a young woman coming to terms with her troubled sibling relationship.

What attracted me to the script was a strong focus on characters and I felt it would be a fun challenge to recreate the style and tone of 80s TV.

Shooting Jack Turbo meant shooting two films. One was John and the kid’s storyline. The other were the original Turbo episodes that they connect over. Developing a visual style for both was important. The former was more grounded and naturalistic. The latter was more stylized and cartoonish to match the aesthetics of 80s television. Given the time and budget limitations we had, our focus was on lighting for an entire setup and modulating small key elements scene to scene.

NY Glam: Was there a scene in the film that was particularly challenging from conception to actual execution?

The closet reveal scene was a challenge given the physical constraints of the location. Not only did we light it day for night, but we also had to capture the excitement and moment of discovery that the kid has within a small set. Choosing to simplify the lighting setup and stick to wider lenses helped make the set feel larger and more mysterious.

Everyone got along very well on set. Since our school’s film department was very small, we were used to replying on each other to do fill multiple roles at once. I knew that in a pinch I could ask someone from the camera team to help with lighting if we were behind schedule. Darcy and our producer Gen established a professional attitude on set that helped keep everyone focused.

I usually think of my role as the person in charge of executing visual style and elements of the script. For Jack Turbo this meant developing a distinct visual language for the TV episodes and the main film. Darcy wanted this film to feel warm and honest while remaining down to earth. We spent a lot of time looking at classic 80’s TV shows to understand how they approached lighting, camera angles, and shot choices. For the main part of the film many of our visual references came from movies like Children of Men, Memento, and A Serious Man.

Things I’ve worked recently include a web series for Adult Swim, a couple correspondent shorts for The Daily Show with Trevor Noah, and a spoof documentary called The Real Super Mario.

When I first get an offer, I like to read through the script and have a discussion with the director about their piece and see if we are on the same page about how the story might look. I look for stories that have well written characters and strong visual elements. I like to mark up the script with notes about how I might shoot a scene, how the camera might be motivated, or different lighting elements I imagine coming into play.

I’ve spent most of my career so far filming on location rather than in studios. Being in New York means you end up filming in a lot of small apartments. It’s always a creative challenge to be able to light a space so it feels natural and also dynamic when your options are so limited.

NY Glam: Is there a film or film maker that inspired you to pick up a camera?

It wasn’t until coming to college that I first dipped my toes into filmmaking and I’m not sure if there was one film or filmmaker who first inspired me. Once I started watching more films, I was fascinated with the effect cinematography had on a movie. I’ve always found cinematography to be a highly technical and creative exercise. I think it uses both sides of the brain that way.

Last summer my cinematography professor from college called me about a film he was going to be shooting. I originally was going to be his 1st Ac but shortly after he said he wasn’t able to work on it anymore and recommended I take over his position as DP. While I’m proud of all the project’s I’ve been able to work on so far, it was a nice feeling to know he had that much confidence in my abilities as a filmmaker.

NY Glam: Do you ever think about directing someday?

I spent a short amount of time directing early in college and found that it wasn’t for me. I think my strength is in crafting the imagery for films.

NY Glam: What are some of the projects that you are working next? Who are you working with?

Darcy and I just finished the first season of a web series called A Tall Order which stars him and my girlfriend Carson. Every episode they make a new classic cocktail in pursuit of a drink that Carson can truly enjoy.

“A film is interesting to me when I realize that the minutes pass quickly through the story.” – Vincenzo De Sio

0
Definition of Yoga: The literal meaning of the Sanskrit word Yoga is 'Yoke'. Yoga can therefore be defined as a means of uniting the individual spirit with the universal...
Read more
Film