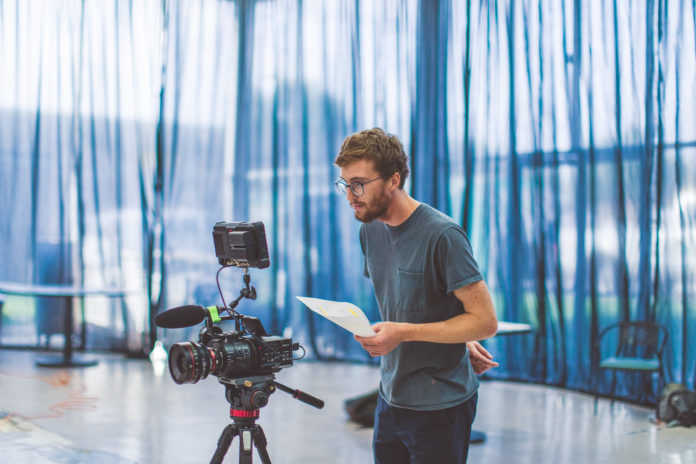 Josh McCausland’s work approaches visual reality from its own unique angle. As both a videographer and graphic designer, Josh is comfortable reconciling the real with the imagined, and it shows in what he creates. His work is refreshing, and exhibits a cleanliness that is never too removed from humanity. Healing plays a large part in creation for Josh as “an outward expression for internal struggles.” Art is his way of continuing to exist “as a child in the living room sketching on the floor, with no restrictions and no worries.” It is this feeling of freedom that Josh’s work truly captures, allowing everyone who interacts with it a much-needed moment of peace in its simple beauty and effortless elegance.
In his pursuits, Josh has completed a BFA at Cumberland University with a major in Entertainment Design and a minor in film studies. He developed his own film company, iQ Flicks during college and now maintains his small business while working full-time for Relativity, in Chicago as a Photo & Video Specialist.

“Anamnesis” is a dive into a man’s conscious and unconscious mind as the physical and imagined world blend in front of him through his struggle with Alzheimer’s disease.

The film was dedicated to my grandparents. The story is of my grandfather who forgets his deceased wife due to Alzheimer’s. He is delivered a picture of her and she tries to reach out to him to remember her through it. It’s a heart wrenching film that shows the true horror of Alzheimer’s, which is completely forgetting the ones you love most.

The film took about 9 months to make. I composed the music first and started preproduction around the idea of telling a story about my grandparents. It was technically a very challenging film to make because I was very set on it being a one take. I wanted to tell this story in a one take performance style piece. It felt like a ballet without dancing really. I did a full write on the behind the scenes process here if you are interested in more https://filmlifestyle.com/how-to-make-a-short-film/

I searched through Facebook groups in the Chattanooga area and eventually met with Bruce who was perfect from the get-go. I had Vienna in mind for a long time. She didn’t look at all like my grandma but she has this style and grace about her that fit perfectly. After having those two mains roles, I posted for filler extra roles and we were good to go for filming.

The story is ultimately about a man who suffers with Alzheimer’s. Quite simply it’s a very intimate look into the mind of someone with Alzheimer’s. The film highlights the struggles and hurt someone goes through. The moments of clarity overshadowed by overwhelming sadness and defeat. We achieved this so well through the one take. Had we cut away to other angles I believe it would not have been as successful. Seeing this all play out in front of you in real time is really immersive.

I don’t believe so. I unfortunately have to be out of town for a funeral.

Personally I would say Chaos Theory was my first film that I made completely out of university umbrella.

Patience is key. I took my time with this one and made sure everything was in order before I actually committed to starting production. I made sure my emotions were in order, my actors were ready and most of all the story was in order. This happened from producing the music first and taking my time with working through the real life story and processing the emotions of it through the music and then going from there.

I don’t think either are particularly hard at all. Getting started only appears hard because of a fear. Starting can be terrifying because of so many reasons, but mostly fear of failure on some level. It’s scary to go into a project you have thrown your heart into and let it become real. It is never exactly how you imagine it. Martin Scorsese said, “If you sit through a first cut of your film and you’re not sick to your stomach, you’re doing something wrong.” At the beginning of each project I always do my best to wrap my head around letting the project become real. And as far as keeping going, every time I finish a project I am even more excited to continue. It becomes a cycle of inspiration rather than constant fear of what’s next. I accept that each project in my eyes will fail or fall short on a certain aspect but it will always fall a little further down the line showing me at least I am progressing in some way.

I’ve really evolved into relying heavily on music as a narrative the past couple years. Chaos Theory and Anamnesis were both involved one takes grounded by the music. The music came first in both and set the mood for the shoot. I have transitioned personally a lot more to composing music and so naturally that has shown its precedence in my directorial appearances as well. It’s been an interesting approach and a huge flip to how I’d been making films for the 5 years prior.

It really depends on what you use to measure success. I think personally I feel a huge sense of pride and growth in myself as a person and that has directly affected my work and the success of my work. The biggest key to growing my work and my art is simply working on the person who creates it, myself. Pushing myself to be better and get back to that kid laying on the living room floor, dreaming and inspired and not letting anything stop his brain from thinking and feeling.

I have so many ideas currently of things I would like to do. I recently just moved to Chicago and am starting over there. I have a couple short films I have written I would like to see produced as well as still working on a feature film script that I would like to start planning on getting a team together for. Right now, I am at a good place though. I will keep writing and composing music when I can and enjoying creating pieces that matter to me. Well, and pieces that matter to others as well. One of the reasons I made Anamnesis was to give people who have experienced Alzheimer’s a doorway to talk about it to others. People typically cry when they watch it. It’s still not easy for me to watch it. But whenever we are sad and vulnerable is typically when we are most connected to others. It’s been so rewarding to show this film and then see people interact and share stories and share hugs and tears together. It’s not an easy watch, but it really has brought people together. I’d like to keep doing heavy work like this that people can connect to on such an emotional level.

I currently don’t have a studio, unless you’re referring to my studio apartment, in which case I sure hope it’s not going anywhere anytime soon because I really enjoy my bed.

Is it Depression: a common worldwide illness

0
Depression is a common illness worldwide, with an estimated 3.8% of the population affected, including 5.0% among adults and 5.7% among adults...
Read more
Film

0
The winner of Best Feature Documentary at The International Filmmaker Festival of New York awarded: WITH A GUN IN THEIR HANDS by...
Read more
Art