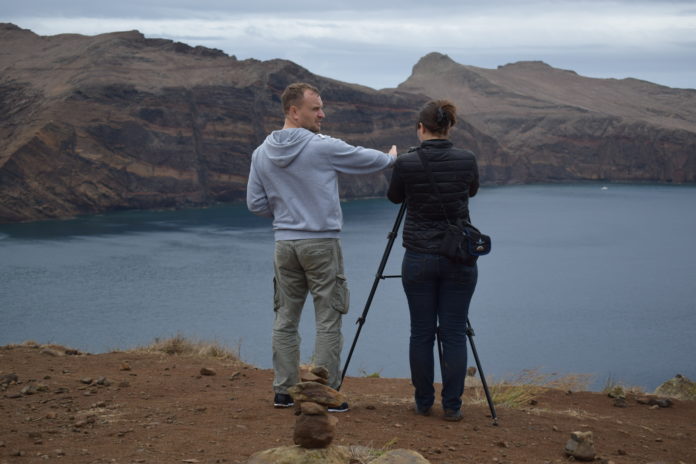 Jaroslaw Gogolin started his film adventure five years ago as a 42-year-old. Today, his productions win awards at festivals, are appreciated by critics and viewers.

Every day he is an electrician. He runs his own small business, which allows for flexible time management, thanks to which his professional career can be reconciled with film passion. He dreams of the day when he will be able to devote himself 100%. Each new project is a good opportunity to polish up an artistic workshop. He learns from mistakes, draws conclusions and gains experience. He finds a lot of inspiration in interviews with recognized directors, cameramen and screenwriters.  At the start he joined the group “Let’s Make a Scene”, which deals in making short etudes, bringing together beginners and those with more experience, whose common denominator was the desire to develop as operators, directors, actors .

I have just finished a short film (6 min. long) poem/music video. Also I am quite busy with advertising (looking for potential producers) for my three (already written) full feature screenplays, and preparing to write down two other stories.

Those, already written, screenplays “SUPERIOR BEING (PART 1 &2)” and “Copland – in self defence” have been selected to many film festivals, to screenplay competition, around the World.

What make me very happy is all the selections and awards are from different Countries around the World (Russia, India, Mexico, Peru, Indonesia, Chile etc.) that means the stories speak beyond just one nation/culture, they are more universal.

There are many films that I am impressed with some of them are: “The Thing”, “Blade Runner” and “Apocalipto” etc.  I love the films which are timeless, with perfectly refined trinkets and an original story. The films which transform you trigger thinking/feeling, leave you changed even long after viewing them.

The processes of my writing are not so common but I am not the only one who does it this way. Stephen King explain it better than I can in many of his interviews like this one: https://www.youtube.com/watch?v=gNvw0BcO_FM  also similar way speaks Guillermo Del Toro: “I am not interested in a plot only in Who? What? And Where?”

To explain a bit better I will use short story which was given by Stephen King, describing the writing process,  in one of the interviews: the process of writing starts with single thought/image and I don’t know where it will eventually lead me…it’s like a person going in the night, into the forest; he sets up a small bonfire and sits still, waiting… after a while all the creature coming out of the forest attracted to the fire.

So I cannot say “I build a character or events” all those are reveals themselves to me when I am in the right state – readiness to listen. I know it might sound crazy but this is how it works…and I know I am not the only one working this way.

Writing the script takes me little time, about a week of intensive work, but before that I have the whole story in my head. Refining the details takes several months, during which I let stories unfold, show images, scenes, interactions between characters. When everything is crystallized thoroughly, I put everything on paper.

I keep saying: “I am just the first one who watched the story…then I write it down”.

I see/watch the scene after scene and sometimes I ask some question and I receive answers.

I start writing only once I can see the whole story already in full grow in my mind.

People sometimes ask me why I write a story (SUPERIOR BEING) happening in Poland in English. The answer is simple – because it is an international language with a global reach. Of course, if we are not native speakers, we process it a bit through the prism of our own culture, customs and national history. And this is beautiful, because in this way we transfer our personal legacy and experience to millions of people around the world.

Each story, in it’s origin/roots/source, is beyond a language, it’s universal.

NY Glam: Top 3 favourite projects that you have been involved in?

I have made a few shorts and last film was 42 min thriller.  I wrote three full feature screenplays. Each new project is a good opportunity to polish up an artistic workshop. I learn from mistakes, I draw conclusions and gains experience. So I would rather thing about future projects…the top three projects are always in front of me, not behind me.

I have started to draw and to paint but still story telling via film is the most important to me.

Follow other film-makers’ advices given in so many interviews. I have been doing this from the start. Make – Learn – Never give up!

I have found a lot of information, very useful to me, in interviews with recognized directors, cameramen and screenwriters, at the You Tube and in the programs like “The Hollywood Reporter Roundtable” or “Directors Guild of America” and other..Film-makers share the details of their work.

First I am going in January to the Jaipur International Film Festival in India.

All three of my screenplays (“SUPERIOR BEING (PART 1&2) and Copland – in self defence) have been selected as well as the last film ”ONCE UPON A TIME ON ALL HALLOWS’ EVE”, so opportunity to meet other film-makers and possibly to find somebody interested in filming my stories.

Also two other screenplays are about to be written down due to they are almost “ripe”. I am writer/director so I want to direct what I write.

0
Josh McCausland’s work approaches visual reality from its own unique angle. As both a videographer and graphic...
Read more
Film

Aquaman And The Lost Kingdom- is scheduled to be released in the United States on December 16, 2022