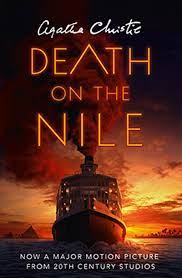 Death on the Nile is a work of detective fiction by British writer Agatha Christie, published in the UK by the Collins Crime Club on 1 November 1937 and in the US by Dodd, Mead and Company the following year.The UK edition retailed at seven shillings and sixpence (7/6)[4] and the US edition at $2.00. The book features the Belgian detective Hercule Poirot. The action takes place in Egypt, mostly on the River Nile.The novel is unrelated to Christie’s earlier short story of the same name, which featured Parker Pyne as the detective.

While on holiday in Aswan to board the steamer Karnak, set to tour along the Nile River from Shellal to Wadi Halfa, Hercule Poirot is approached by successful socialite Linnet Doyle [previously Linnet Ridgeway]. She wants to commission him to deter her former friend Jacqueline de Bellefort from hounding and stalking her: Linnet had recently married Jacqueline’s fiancé, Simon Doyle, which has made Jacqueline bitterly resentful. Poirot refuses the commission, but attempts unsuccessfully to dissuade Jacqueline from pursuing her plans. Simon and Linnet secretly follow Poirot to escape Jacqueline, but find she had learned of their plans and boarded ahead of them. The other Karnak passengers include Linnet’s maid (Louise Bourget) and trustee (Andrew Pennington), romance novelist Salome Otterbourne (a thinly disguised portrayal of Elinor Glyn), and her daughter Rosalie, Tim Allerton and his mother, American socialite Marie Van Schuyler, her cousin Cornelia Robson and her nurse Miss Bowers, outspoken communist Mr. Ferguson, Italian archaeologist Guido Richetti, solicitor Jim Fanthorp, and Austrian physician Dr. Bessner.

While visiting Abu Simbel when the Karnak stops there, Linnet narrowly avoids being crushed to death by a large boulder that falls from a cliff. Jacqueline is suspected of pushing the boulder off the cliff, but she is found to have been aboard the steamer at the time of the incident. At Wadi Halfa, Poirot’s friend Colonel Race boards the steamer for the return trip. Race tells Poirot that he seeks a murderer among the passengers. The following night in the steamer’s lounge, Jacqueline expresses her bitterness toward Simon and shoots him in the leg with a pistol, but immediately breaks down with remorse and kicks her pistol away. She is taken to her cabin by the two other people present, Fanthorp and Cornelia. Simon is shortly brought to Dr. Bessner’s cabin for treatment for his injury. Fanthorp looks for Jacqueline’s pistol but reports that it has disappeared. The following morning, Linnet is found dead, having been shot in the head, while her valuable string of pearls has disappeared. The pearls are worth roughly £1,000,000 in today’s pounds. Jacqueline’s pistol is recovered from the Nile; it was wrapped in a velvet stole belonging to Miss Van Schuyler, which she says was stolen the previous day. Two shots had been fired from the pistol.

When interviewing Louise in the cabin in which Simon is resting, Poirot notes an oddness in the words she uses. Miss Bowers returns Linnet’s pearl necklace, which was stolen by Miss Van Schuyler, a kleptomaniac. However, Poirot realizes it is merely an imitation of Linnet’s real necklace. He notes two bottles of nail polish in the victim’s room, one of which intrigues him. Louise is then found stabbed to death in her cabin. Mrs. Otterbourne later meets with Poirot and Race in Simon’s cabin, claiming she saw who killed the maid, to which Simon loudly declares his surprise. Before she can reveal who it is, she is shot dead from outside the cabin. Poirot soon confronts Pennington over his attempted murder of Linnet by pushing the boulder off the cliff – Pennington had speculated unsuccessfully with her inheritance, and came to Egypt upon learning of her marriage to Simon to trick her into signing documents that would exonerate him. However, he claims he did not murder anyone, despite his revolver having been used in Mrs. Otterbourne’s murder. Poirot recovers Linnet’s genuine pearls from Tim, who had substituted an imitation string of pearls for the real necklace. Race realizes Richetti is the man he is looking for.

Poirot reveals to Race, Bessner, and Cornelia that Simon killed Linnet. The murder was planned by Jacqueline; the pair are still lovers. Simon married Linnet as part of their scheme to get Linnet’s money. On the night of the murder, Jacqueline deliberately missed Simon, who faked his leg injury with red ink. While Fanthorp and Cornelia were distracted by Jacqueline, Simon took her pistol that she had deliberately discarded, went to Linnet’s cabin, and shot her. He placed the nail polish bottle which had contained the red ink on Linnet’s washstand, then returned to the lounge and shot his own leg. Simon used the stole to try to silence the pistol, loaded a spare cartridge to make it seem that only two shots were fired, and threw the pistol overboard. Louise and Mrs. Otterbourne were murdered by Jacqueline, who was warned by Simon when the plan was going awry – Louise witnessed Simon entering Linnet’s cabin that night, and hinted at this to Simon when Poirot was interviewing her in an attempt at blackmail; Mrs. Otterbourne witnessed Jacqueline entering Louise’s cabin before stabbing her. Poirot confronts Simon, who confesses. He is arrested, as are Jacqueline and Richetti. As the steamer arrives back in Shellal and the passengers disembark, Jacqueline shoots Simon and herself with another pistol she possessed, so they may escape the gallows. When pressed, Poirot reveals he had known she had a second pistol, but had sympathetically chosen to allow her to take her own life.

0
Yahya Abdul-Mateen II is part of Aquaman And The Lost Kingdom- an upcoming American superhero film based on the DC Comics character...
Read more
News & Lifestyle

0
According to Social Media Examiner, 97% of small businesses use social media to attract new customers, but 85% of business owners aren't...
Read more
Film