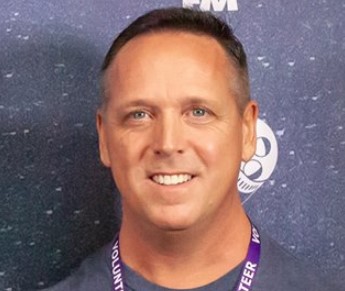 Kevin Machate began his film career as an actor, Kevin quickly moved into Producing and eventually directing and writing. Kevin’s films and screenplays have won numerous awards worldwide with his two most recent films having been screened in various cities in the US, Europe, South America, Oceania, and Asia.

He has directed six short films with the seventh shooting in February 2022, and his credits as a producer have exceeded 50 at the time of this writing. His recent works include three short series starring Golden Globe and Tony Award winner Barry Bostwick and Saturn Award Winner Doug Jones, along with a series of short musical and educational videos (With puppets!) starring Ed Helms.

He currently has two short horror screenplays in festivals –  Gloomy Sunday, a short horror script about the real reason behind the “Hungarian Suicide Song” and Stranded, a distinctive combination of thriller, ghostly scares, and existential horror.

Recent projects include “Last Thursday,” a comedy about a bank robbery and “Come Along, Harry Higgins” which is based on a short story by O. Henry.

Kevin is a disabled veteran of the US Air Force and three-time Guinness World Record holder. He currently resides in Waco Texas with his dog, Moose, and works right next door to Waco’s most famous reality TV married couple.

I have two successful short screenplays that I am working on expanding into feature length screenplays. A horror script (The finalist at ISC) called “Gloomy Sunday” and a comedy called “Last Thursday”. I also have another short horror script called “Stranded” that I recently completed and has been well-reviewed so far. I hope to shoot that film later in 2022. I am shooting my next short film, “Milton” in February 2022 and hope to have it in festivals by Fall.

One really has to know who these people are. What do they like? What do they hate? What is their favorite flavor of ice cream? One has to ask questions of them and learn what their personalities are like and how they speak. Creating characters is like interviewing. One really needs to delve deep and know how they would behave in any situation.

I feel like this is a great opportunity that winning would open some doors and also hopefully lead to further opportunities. Winning a cash prize would really help as well, because I am about to shoot my next film.

I was an actor in a series called “The Guards Themselves” that we are now developing for two more seasons. These three seasons will span more than a decade in the character’s lives so it will be interesting to see how those develop. I will also be producing on the 2nd and 3rd seasons.

I am currently expanding the ISC Finalist script, “Gloomy Sunday” and I feel like it has the most promise to go into development once it’s completed. I have a few connections that I hope will be able to help with that. I really see this as kind of a cult classic if I am able to get it made with the people I have in mind. It’s a very exciting prospect.

Several years ago, I worked on a film called “Bernie” and got to work with Jack Black for a couple of days. He was one of the nicest people I’ve ever met. Richard Linklater is too. It was a really great experience, especially for someone like me who was still new to the industry at the time. It really showed that you can remain a good/kind/generous person and still be a huge star.

I started as an actor, but realized I wasn’t the best at it because I was always in my head, wanting everything to be “right.” So I started producing and realized that is where one of my strengths was. Although it’s not as creative, I am able to make things happen. I also direct, but I don’t think that is my strongest skill either. Writing has been good to me so far, so I think I’ll just keep doing that.

Be persistent, but realistic. It’s very different for one starting out at 20 than it is starting at 40. Follow your dreams, but trust your gut.

0
Alida Pantone is a talented Italian Actress, Festival Director and Producer based in London. She began her acting career in Italy, working as...
Read more
Film

Small businesses during the COVID-19 crisis