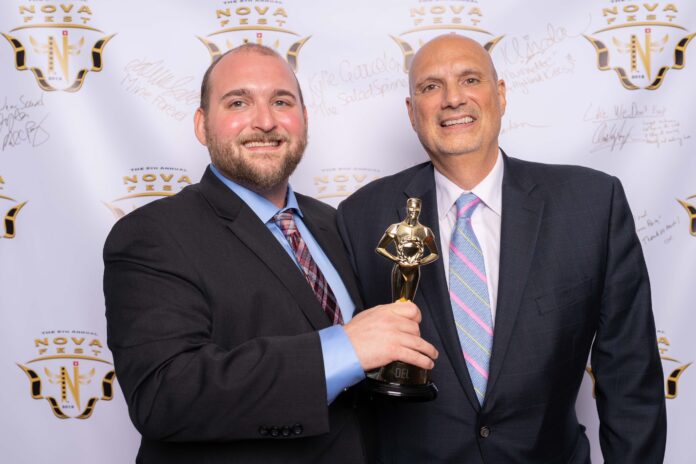 Michael Volpe, a native New Yorker, is a former national reporter for several Washington, DC news outlets, and a former federal government official who served under the Carter, Reagan, Bush and Obama administrations. Andrew M. Volpe is a video producer and editor whose documentary film and screenplay, “The Free Agent Fan” has won a number of film festival awards, including Best Documentary and Audience Choice, and has been optioned by Hollywood. In 2020/21, Andrew won 4 video awards for his pet adoption Public Service Announcement, Cat Scratch Fever: The Cat Video (https://youtu.be/tG-4Xw5aHXk).

(Native New Yorker Michael Volpe answers) “My son, Andrew M Volpe, and I have completed a new screenplay entitled The Dedicated Physician. A female neonatal surgeon overcomes a painful miscarriage and a divorce from her unfaithful wife to stop a greedy board of directors from closing the only hospital in an inner city neighborhood. In a surprise twist, this surgeon’s life is eventually saved by an individual she delivered years earlier.”

(Film maker and screenwriter Andrew M Volpe adds this answer) “I am also working on an animated cartoon for next Christmas where various Nutcrackers debate how important each is to the meaning of that holiday. It’s sort of Rudolph the Red Nose Reindeer meets The Real World.”

(Film maker and screenwriter Andrew M Volpe answers) “When we write a screenplay and it eventually becomes a feature length film our goal is to fulfill a 3 act structure with an interesting scope which packs a message that any audience will enjoy. I went into film making and screenwriting because it was very important for me to make something that connects with people. If you are lucky your work is an artistic expression that mightchange someone’s life just a little bit.”

(Michael Volpe answers) “A good character is the backbone of any story – if the audience is uninterested in the protagonist then your story has nothing going for it. Your character must also be flawed as we all are, so audiences can see themselves in the character.

(Andrew M Volpe answers) “It is an honor to be a finalist in the prestigious ISC Screenwriting Competition. Just to be mentioned in the same breath as the other writers in this illustrious group is great validation of the work my Dad and I have accomplished. If we were lucky enough to win it would the pinnacle of our writing careers.”

Cat Scratch Fever: The Cat Video, an awarded PSA about the benefits of cat adoption.

NYC La Famiglia e Tutto: NYC Family is Everything, a finalist in the ISC Screenplay Competition which is a coming of age story set in 1970 Greenwich Village.

(Michael Volpe answers) “Every year, I volunteer as a Secret Santa for the US Postal Service where I try to fulfill the Christmas wishes of needy children who write to the North Pole courtesy of that mail service. It does my heart good to surprise the children and their families with gifts and allows me to pay it forward, so to speak, and use my writing skills to craft hearth warming messages.”

(Andrew M Volpe answers) “I try to mentor young people who are striving to break into the business and explain to them that a) it is hard work, b) expect rejection and c) never stop learning and creating for if you are talented, you will succeed.”

(Andrew M Volpe answers) “I read an article recently that did a better job than I in explaining necessary advice. It included explore the wide variety of roles in the industry from the art department to sound, location, and even accounting so you have a deep understanding of what goes into a movie. Also build a portfolio of work, make connections, and enter contests such as the ISC competitions.”

(Michael Volpe answers) “Besides the Doctor and Family screenplays we finished, Andrew and I have begun work on a WW II script as well as an Animal House meets Big Chill script about a 1970s college fraternity and members who grow old together.”

NY Glam: Where can everyone keep up with you to learn more? …social media…website.

Joshua Marc Allen – “I’m grateful for how each project has propelled me onward into a bigger and better project each time.”

Black Adam – an superhero film is scheduled to be released in the United States on July 29, 2022.

0
Black Adam is an upcoming American superhero film based on the DC Comics character of the same name. Produced by New Line...
Read more
Film