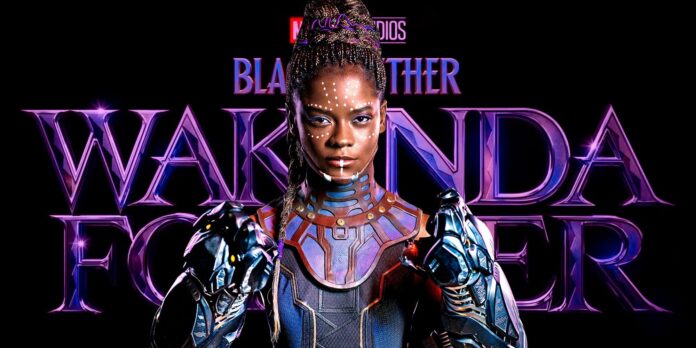 Black Panther: Wakanda Forever is an upcoming American superhero film based on the Marvel Comics character Black Panther. Produced by Marvel Studios and distributed by Walt Disney Studios Motion Pictures, it is intended to be the sequel to Black Panther (2018) and the 30th film in the Marvel Cinematic Universe (MCU). The film is being directed by Ryan Coogler, who co-wrote the screenplay with Joe Robert Cole, and stars Lupita Nyong’o, Danai Gurira, Martin Freeman, Letitia Wright, Winston Duke, Angela Bassett, and Dominique Thorne. Ideas for a sequel began after the release of Black Panther in February 2018. Coogler negotiated to return as director in the following months, and Marvel Studios officially confirmed the sequel’s development in mid-2019. Plans for the film changed in August 2020 when Black Panther star Chadwick Boseman died from colon cancer, with Marvel choosing not to recast his role of T’Challa. Other main cast members from the first film were confirmed to return by that November, and the title was announced in May 2021. Production began in late June 2021, taking place in Atlanta and Brunswick, Georgia, and around Massachusetts, and lasted until early November before going on hiatus later that month until early 2022.

With the release of Black Panther in February 2018, producer Kevin Feige said there were “many, many stories” to tell about the character, and he wanted director and co-writer Ryan Coogler to return for any sequel; Marvel Studios wanted to keep the creative team as intact as possible, while Walt Disney Studios chairman Alan F. Horn, despite feeling it was too early to discuss a sequel, was also positive about the desire to have Coogler return as director. Coogler wanted to see how Chadwick Boseman’s T’Challa / Black Panther would grow as a king in future films, since his reign only recently began in the Marvel Cinematic Universe (MCU) in contrast to the comics in which he had been king since childhood. In March 2018, Feige said there was nothing specific to reveal about a sequel, but Marvel had ideas and a “pretty solid direction” on where they wanted to take a second film. That month, Boseman’s agent Michael Greene was in negotiations for the actor to return as T’Challa in two planned Black Panther sequels for a reported pay of $10 million and $20 million, respectively. By October, Coogler had closed a deal to write and direct a sequel to Black Panther. Despite both Marvel and Coogler having always intended to work together again after the successful release of the first film, Coogler avoided rushing into completing a deal for a sequel. Negotiations with Coogler were completed “under the radar” in the months following the first film’s release. He was expected to begin writing the sequel in 2019, ahead of a planned filming start in late 2019 or early 2020.

In November 2018, Letitia Wright was confirmed to be reprising her role of T’Challa’s sister Shuri for the sequel. When Angela Bassett, who played Ramonda in Black Panther, was asked if the main cast would return for the sequel, her husband Courtney B. Vance said they would. He said this included Michael B. Jordan as Killmonger, who was killed in the first film, and Bassett agreed. Feige dismissed Vance’s statement in June 2019 as “pure rumor”, saying there were no set plans for the film as Coogler had just begun outlining it and had not yet shared his plans with Feige or co-producer Nate Moore. The next month, John Kani expressed interest in reprising his role as T’Challa’s father T’Chaka in the film, and Danai Gurira stated that Coogler had confirmed she would be reprising her role of Okoye in the sequel. Feige confirmed the sequel’s development at the 2019 San Diego Comic-Con, while Martin Freeman confirmed in August that he would reprise his role as Everett K. Ross in the sequel. A release date of May 6, 2022, was announced at D23 along with the placeholder title Black Panther II. Feige said Coogler had completed a script treatment for the film that included a villain and new title. At the end of 2019, Ruth E. Carter confirmed that she would be returning from the first film as costume designer for the sequel, and said that she was set to begin work on it in “the fall”. Feige, Boseman, and Coogler discussed adapting elements of Boseman’s more “Gung ho” T’Challa performance in the second episode of What If…? for the film.

Black Panther: Wakanda Forever is scheduled for release in the United States on November 11, 2022. It was previously scheduled for May 6 and July 8, 2022. It will be part of Phase Four of the MCU.

“The wildlife and its habitat cannot speak, so we must and we will.” – Theodore Roosevelt

0
The September 11 attacks, referred to as 9/11, were a series of four coordinated terrorist attacks by the Islamist group Al-Qaida, against...
Read more
Film

Craig Robinson is part of: The Bad Guys