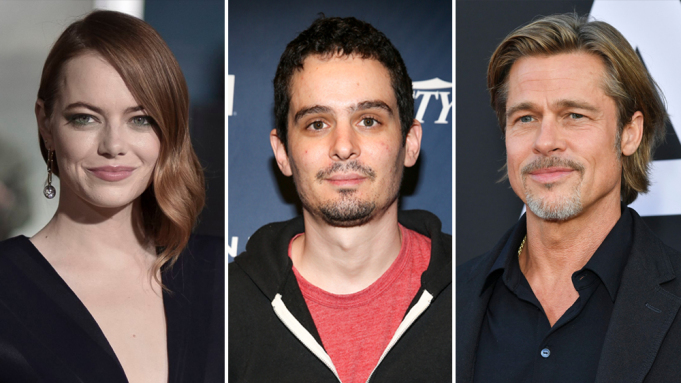 Babylon is an upcoming period drama film written and directed by Damien Chazelle, starring Brad Pitt and Margot Robbie in the lead roles. Tobey Maguire serves as an executive producer, and appears in a supporting role.

It was announced in July 2019 that Damien Chazelle had set his next project, a period drama set in the golden age of Hollywood. Lionsgate was the frontrunner to acquire the project, with Emma Stone and Brad Pitt in the mix to star. In November, Paramount Pictures acquired worldwide rights to the project, with Stone and Pitt still circling roles. Pitt confirmed his involvement in January 2020, describing the film as being set when the silent film era transitioned into sound. He will play a fictional character based on actor and director John Gilbert. In December 2020, Stone exited the film due to scheduling conflicts, with Margot Robbie now in early negotiations to replace her, and Li Jun Li was cast to portray Anna May Wong. Robbie would be confirmed in March 2021 to play Clara Bow, with Jovan Adepo and Diego Calva also joining. In June, Katherine Waterston, Max Minghella, Flea, Samara Weaving, Rory Scovel, Lukas Haas, Eric Roberts, P.J. Byrne, Damon Gupton, Olivia Wilde, Spike Jonze, Phoebe Tonkin and Tobey Maguire joined the cast. In July 2021, Jean Smart joined the cast.[12] In August 2021, Chloe Fineman, Jeff Garlin and Troy Metcalf joined the cast of the film.

0
Netflix has yet to confirm exactly when Manifest season 4 will be released. Production on the final season began in November 2021,...
Read more
Art