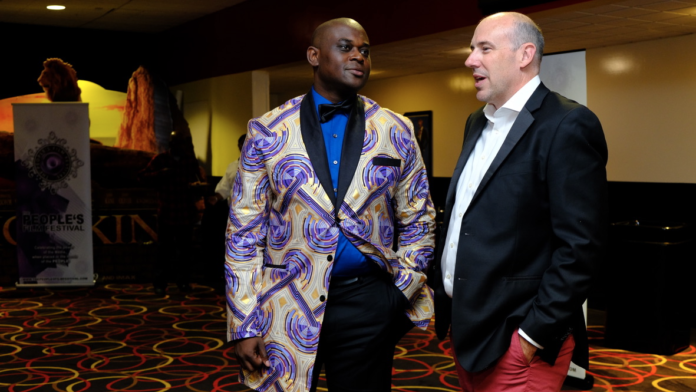 As a writer, his screenplay ‘Mourning Meal’ won 5 awards (including best short screenplay at NYC Horror Film Festival 2018) and was featured as a finalist in 7 writing competitions. Jamal’s poetry is featured in the historical all-black issue of Star*line Magazine and has been featured several times in SPACE AND TIME MAGAZINE, PENUMBRIC Speculative Fiction Magazine, and in the upcoming anthology CHIRAL MAD 5 alongside such greats as Linda Addison, Sharee Renee Thomas, & Jack Ketchum.

Motivated by his accomplishments, Hodge has blossomed to take his talents to the next level. Jamal’s tone of work, or what he calls, “Inspirational Darkness”, can be described as a melding of genres. The Psychological Horror, Thriller, and Inspirational genres are Jamal’s usual forte of film making. His mission is to add value to people’s lives through his unique brand of cinema. He’s excited to continue to grow outstanding partnerships to create memorable and impactful cinematic experiences for audiences across the world.

What was the most significant decision in shooting your current film “Mourning Meal”?

Jamal Hodge: As always, the most critical decision is who you decide to go on the journey with.  The cast and crew are the heart and spirit of the movie. Finding the right people is critical, and l was blessed to have Linda Addison’s poem for the inspiration of our film, also the brilliance of Ruya Koman as Cheryl, the 3 amazing child actors Nicholas Valentino, Max Masefield, and Samuel Acierno. Also having one of the best production companies in the game with Nonstop Show Group, and of course the cinematography of the great Koshi Kiyokawa. Really, the whole cast and crew were the most significant choice I made when seeking to get this done.

Jamal Hodge: Since I’m the writer it’s hard for me to say, but the opening scene with the car accident… that terrible seed of anguished pain, that scene set the tone for the film.

After the tragic loss of her son, Cheryl, a grieving mother, adopts a new philosophy, one that changes her outlook on life and grief. One where suffering has become a dear friend… that must be shared.

Jamal Hodge: By pre-planning. Pre-production and communication with the key members of your cast and crew are Key. Also being committed to creating an environment on set where everyone can be their best is just as important as anything else, o feel a lot of times people underestimate how important the work environment is to the quality of the artist’s performances.

Jamal Hodge: People exploding into an uproar over some of its more shocking parts while watching them being sucked into an emotional black hole of dread… and loving it!

Jamal Hodge: Very proud of my work on “The Jump” and “A Happy Divorce”.

Jamal Hodge: Pan’s Labyrinth- it uses darkness to show light and is just a beautiful collage of pacing, writing, acting and cinematography.

Seven- “What’s in the Box!” Fincher is the bar I strive to reach in suspense.

Psycho- the power of suspense and score. The shower scene is a major inspiration for the bedroom scene in Mourning Meal.

Menace to society- the grit, the honesty. Was the realest thing I’d ever seen on the screen at the time.

Training Day- how the collaboration of great actors and a director can elevate the urban film to an art form. The power in the nuance of well-crafted dialogue.

Jamal Hodge: I can’t give out my key secrets but let’s just say I ferment relationships year round before a project is even on the table, and I encourage everyone to hold a sense of ownership of their role in the film. People will work harder when you give them a voice and an opportunity for personal pride in their own creative choices.

Jamal Hodge: Not to sound morbid but there was a point when I was homeless as a child in New York City.  For survival’s sake, I had to learn how to study the body language of adults, to read the character of others in their movements and inflections. Then, as a teenager, I worked at DCTV as a youth documentarian where I observed people for years. This all taught me the power of truly seeing others, that people have multiple meanings in all they do and say, and to capture that in my actor’s performances.

So, I love my characters to be walking hypocrisies, light caught by shadows. I am obsessed with making the audience confront the duality of their own nature.

It can bring catharsis and even a newfound compassion in them when they walk out the theatre.

Jamal Hodge: My role is, to tell the truth. To use darkness to show light. I feel that I’m more of a storyteller than a filmmaker, film is just the shell.

Jamal Hodge: Cannes of course… there’s simply nothing like it. It must be experienced to be believed. Domestically, I have to shout out some great NYC festivals starting with The Hip Hip Film Festival, founder CR Capers is truly about getting emerging filmmakers that check and exposure opportunities. Then we have The New York City Horror Film Festival- one of the best genre film festivals in the country with just a cool ass staff. There of course is the Tribeca Film Festival but I prefer the wonderful Chelsea Film Festival and their amazing catalog of quality films, filmmakers, and panels. Shriekfest on the west coast is pure gold as well and is managed by some of the realest people you’ll ever meet in L.A.

Jamal Hodge: Yes- if they choose to. I can only speak for myself. I don’t feel that all the stories I tell have to be rooted in black culture, but I do feel compelled as a black man to tell stories we people of color in central roles and with latent themes the resonate with my culture and unique perspective of the American experience.

The main message I want to convey in my films is the transmutation of pain into beauty, the extraordinary in the ordinary, and the fact that all people are just as alive as you are.

Jamal Hodge: I enjoy long walks on the beach… nah for real though, I live by one. For me, I love curiosity and learning I try to learn something new every day. Also, fitness is a big hobby for me. But most of all I enjoy traveling.

Jamal Hodge: I want to be remembered for the quality of my stewardship of what God and people entrusted me with. I want people to say he added value to my perspective, he helped me transmute pain to beauty. He left the world a little more compassionate.

The main lesson I learned is the only real choice we have in life is what/who we choose to serve, so choose well.

I learned all beings are facing some form of pain. We are all finite, temporary, we all suffer. To me, that means we are all worthy of some degree of compassion. That is the major theme in all my films.

I learned happiness comes from when progress meets service. Still, the pursuit of happiness makes you unhappy, and we’re here in fact to pursue purpose and meaning, to accept the value in all emotions as a part of the human experience.

1.     Have a message YOU believe in unapologetically

2.     Discipline is the root of all success

3.     We all know our time and money are precious currency, but often we forget that out attention is as well. It must be protected. Where you place your attention is what you become.

4.     Be a man or woman of value. Always give more than asked for, and you will gain more than you expected.

Kristofer Hivju,’Game of Thrones’ actor, he tested positive for Covid-19

0
Kristofer Hivju, a "Game of Thrones" actor is the latest celebrity to say he's been diagnosed with the coronavirus.
Read more
Film

The Crown, Season 5, everything we know so far