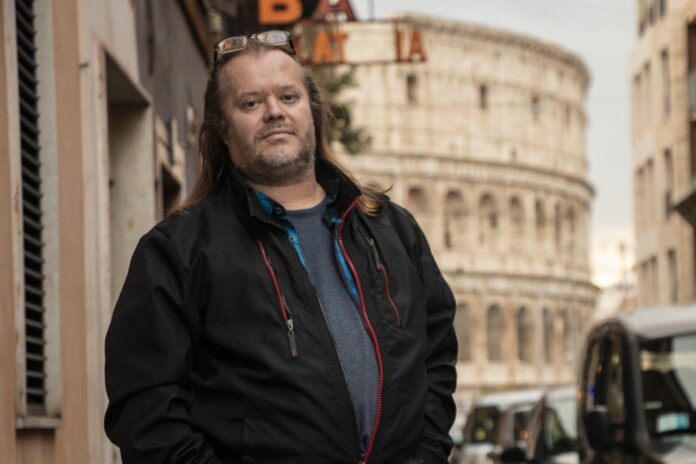 Andamion Murataj is a prominent film writer and director, whose films have entertained, thrilled and enlightened for the past decade many movie fans in Europe and United States. He is considered as one of the brilliant filmmakers who is leading the way in the art of cinema. A mastermind with uncompromising cinematic vision and compelling storytelling.

Andamion Murataj received The Silver Bear for the Best Screenplay at the prestigious Berlin International Film Festival (2011) for the feature film “The Forgiveness of Blood” shared with Joshua Marston. His movies exert a powerful influence on mainstream cinema, that sparks intellectual dialogue about film-history and cinematography.

Andamion Murataj is a founder and director of Balkan Film Market and Albascript Workshops. He is also a member of international jury in many festivals across Europe.

Andamion holds an MFA in Film and Electronic Media from American University in Washington DC.

Are you working on anything new?

Andamion Murataj: When I come to think of it, everything I am working at the moment it is naturally “new”. There are not only new stories or new projects that I am involve or trying to develop, but also are new angles or/and new takes, even on certain shelfed project that sometimes I happen to return and undust them. Times change, we change, hence new ideas and perspectives on certain things sometime happen to force us to get back to old projects changes and figure out new approaches.

Andamion Murataj: There are a few things piled up on top of the projects that couldn’t happen because of Covid. So as everywhere else, despite the lack of funding, 2021 is expected to have a boom of projects that are ripped for production. And, on top of those, there are also a certain stories and characters inspired from recent events, that I am developing right now, that will keep me busy for some time.

From a storytelling perspective, has that advancement in technology resulted in better movies?

Andamion Murataj: Generally speaking, the advancement in anything, naturally has an impact and ultimately pushes everything forward, although the impact some time is not immediate. I believe there is a period of confusion, as it is of incubation and maturation. For one thing the technological advancement not only have tremendously democratized the media by giving the opportunity to express themselves on the palm of the hand to millions of content creators, but also have facilitated the tools and process of achieving great things with minimal effort. Still, so far these are not enough to result in better storytelling. Having said that I believe that eventually in the near future the development on the field of Artificial Intelligence will most likely revolutionize storytelling at its core and will have a tremendous impact in creativity as well as consuming of content.

What’s the mark of a good story for you?

Andamion Murataj: A good story moves you. It does not always please you, but it most definitely disturbs your peace, compelling you to react emotionally and rationally in more than one way.

What is your recipe when writing your movie characters?

Andamion Murataj: It would have been nice to have one that we all can follow, but unfortunately there are no such recipes, as there is no recipe on how to paint a good painting or a line of music… Often it takes the painstaking work of a surgeon to go under the skin of the character and let him be and reveal himself. Easier said than done!

What are some of your recent film projects?

Andamion Murataj: There are a handful projects that I am involved at the moment in various stages of development. One of these, “Man of the House” is in the advanced stage funding competition and hopefully going into production this year, and some other projects are on the earlier stages. It remains to be seen in which one of these I will be working for the long haul.

What does success look like to you these days?

Andamion Murataj: Well, I wouldn’t know that. I can only assume that for as long as you get to do what you love and love what you do, you are well on the path of living a pretty successful life, in a very personal sense. As with every path, there are ups and downs, twists and turns, but despite the troubles, if you still have the guts to keep the course, I think you are pretty set.

Has Covid-19 changed your plans in filmmaking this year? Has that been challenging for you?

Andamion Murataj: It would be interesting to find someone in the film business (or elsewhere for that matter) that can heartedly say that pandemic did not affect his plans. Film, being first and foremost a collective undertaking, depending in many, many, external factors is probably hit the hardest. The abrupt interruption of traditional theatrical releases, combined with the boom of online content platforms, is causing a “perfect storm” in transforming the film business as we know it. But, in the end of the day, telling stories will survive the changing nature of the business, and despite of the formats of the future, we will always need arts being painting music, films and literature… So, better than trying to figure out how to outsmart the currents, I would rather keep doing what I feel doing and try to do it best way I can.

What role have film festivals played in your life so far? How do you get the most out of them?

Andamion Murataj: After making a good film, opening to a good festival is of prime importance for the independent cinema. Attending a good festival doesn’t make your film better, but not attending, it surely makes it much harder to breakthrough. This is all more crucial for films coming from low output countries and especially critical for films in the languages that are not broadly spoken.

Nowadays festivals are for most part are attached to some sort of a film market and there is nothing better for publicity, sales and expanding network of collaborators. Festivals are not just the place for competition and accolades, but rather an awesome opportunity for launching new potential partnerships.

What tips would you give to beginner filmmakers?

Andamion Murataj: By now film world have seen about everything imaginable and this is discouraging. The only thing they have seen yet is YOU. And there is hope, so, find your voice and sound loud and clear. It might take time and work, but eventually you are not gonna be screaming in the desert… More than some “hope”, the odds are real that if you really find your voice and really have something to state, you will be heard.

Andamion Murataj: The future feels pretty much like the past. In past twenty years the business has changed so rapidly, and is only propelling forward… Whatever looks advanced nowadays, it will be pretty obsolete in next twenty years. My first digital camera investment is no match for the quality of the camera of a mediocre mobile phone today. This is a losing battle that we always belong in the ancient world. What will surpass us, are not the formats, but rather the stories of our era. We will still care for the Ulises and his journey back home for a few thousand years to come…

What are your plans for the future?

Andamion Murataj: Surviving the pandemic for sure, not only in good health, but most importantly in good spirit. As every major disaster, this one too, will leave its scar on us. But, in the darkest hour flourishes the greatness of human spirit, and some of among us, through sacrifices or achievements will lead the way to a better future – such vital characters can’t go by unnoticed by film literature and other works of art. I am sure such stories and characters will also leave their mark.

Rachel Thomas -“Getting positive feedback is certainly validating but the most important part was how it opened up these mental doors for me.”

Gabriela Jozić: “We are not all the same and we need to respect each other and not condemn someone’s choices.”

0
Exclusive Interview with Gabriela Jozić -Painter Gabriela Jozić is a 30-year-old painter and photographer from Rijeka, Croatia, where she...
Read more
Film