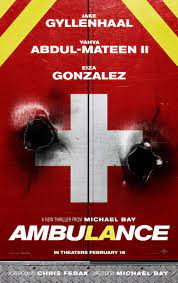 Ambulance is an upcoming American action thriller film directed and produced by Michael Bay. Written by Chris Fedak, it is based on the 2005 Danish film of the same name by Laurits Munch-Petersen and Lars Andreas Pedersen. It stars Jake Gyllenhaal and Yahya Abdul-Mateen II as bank robbers who steal an ambulance occupied by a paramedic (Eiza González), and a patient in critical condition. The project was first announced in August 2015, when Phillip Noyce was attached to direct. Two years later, however, he was replaced by Navot Papushado and Aharon Keshales, both of whom were eventually replaced by Bay in 2020. Principal photography with cinematographer Roberto De Angelis began in January 2021, in Los Angeles, and concluded that March. The film is scheduled to be theatrically released by Universal Pictures on February 18, 2022.

Ambulance is scheduled to be theatrically released in the United States by Universal Pictures on February 18, 2022. The marketing campaign for the film began on August 25, 2021, when an official trailer was shown at CinemaCon. While The Hollywood Reporter compared the footage to Heat (1995) and Training Day (2001), Deadline Hollywood noted that the trailer featured “SWAT teams, guys getting thrown through glass, fast cuts, and the rapid rhythm that Bay does best.” On October 21, 2021, the trailer was released online alongside photographs of filming taking place. The trailer itself received positive reviews from viewers,and Entertainment Weekly wrote that the film looked like “pure chaos, thanks to a lot of quick camera cuts, loads of gunfire, a high-speed ambulance chase, and Jake Gyllehaal doing the absolute most with his bank robber character.”

“A hero is someone who has given his or her life to something bigger than oneself.”- Joseph Campbell

0
Netflix has yet to confirm exactly when Manifest season 4 will be released. Production on the final season began in November 2021,...
Read more
Art