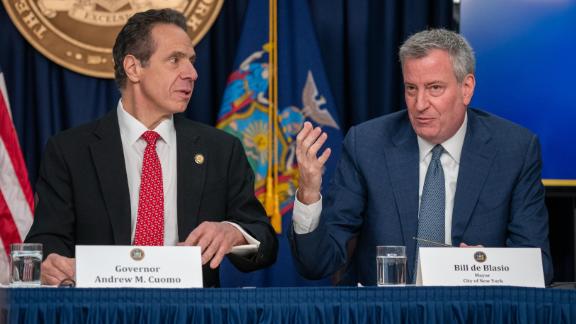 According to a statement from the mayor’s office , starting Tuesday , all New York City bars and restaurants will onlly be allowed to offer takeout and delivery.
“This is not a decision I make lightly,” de Blasio said. “These places are part of the heart and soul of our city. They are part of what it means to be a New Yorker. But our city is facing an unprecedented threat, and we must respond with a wartime mentality.”

Also, Mayor Bill de Blasio announced Sunday. Schools will remain open for the only the next five days to provide meals to students who need them and remote learning will begin on March 23. The Mayor said schools will be closed at least until April 20 and potentially for the rest of the school year.

Mayor Bill De Blasio announced Sunday that the city’s senior centers will be closed to all activities other than “grab and go” meals. Some centers may still offer deliveries to the elderly, he said.

Governor Andrew Cuomo called on President Trump to mobilize the Army to help states respond to the coronavirus epidemic:

State and local governments alone simply do not have the capacity or resources to do what is necessary, and we don’t want a patchwork quilt of policies. … States cannot build more hospitals, acquire ventilators or modify facilities quickly enough. At this point, our best hope is to utilize the Army Corps of Engineers to leverage its expertise, equipment and people power to retrofit and equip existing facilities — like military bases or college dormitories — to serve as temporary medical centers. Then we can designate existing hospital beds for the acutely ill.

We believe the use of active duty Army Corps personnel would not violate federal law because this is a national disaster. Doing so still won’t provide enough intensive care beds, but it is our best hope.

0
In November 2001, the UN General Assembly declared November 6th as the International Day for Preventing the Exploitation of the Environment in War and...
Read more
Film

0
Dwayne Johnson made his wrestling debut in the USWA under the name Flex Kavanah where he won the tag team championship with...
Read more
Film

Aaron Smith: “Receiving a cash prize from ISC gives me the satisfaction of being the best.”