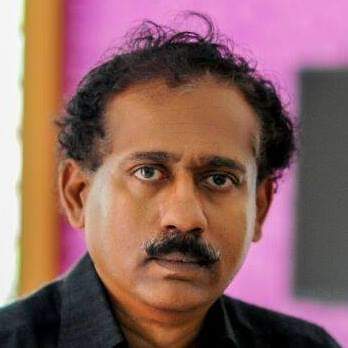 Madhu Ramanathan is 55 years old and lives in Trivandrum, India. He has been writing for the past 32 years and has published four books. Two of them are Malayalam novels and one is an English book of poems (A Sweating Mind) and the other is a compilation of poems, stories and conversations between two characters (Glimpses of Life through Cobweb). Death Offers Life – last moments of Vincent Van Gogh is his first endeavour with the film world. It is based on his story “Vincent Van Gogh meets Death” published in the book Glimpses of Life through Cobweb. Death Offers Life has got 297 awards till date from film festivals held in 28 countries. He is married to Chandini TA and has two children, Rani and Ranjan.

NY Glam: Tell us a little about yourself, growing up and your passions.
I have been writing since my 23rd year. I am not a famous writer and write mostly in Facebook. Satire comes to me easily and am writing captions for a cartoon feature in a Malayalam weekly for over 3 years. Death Offers Life happened because I produced it. I have many projects in my head but can materialize them only if there is financial support. Someone has to believe in me and invest. Even though it is a far cry I am waiting hopefully
for it to materialize.

NY Glam: Did you have any specific influences growing up that lead you towards the film industry?
I was always a movie lover. Action and suspense movies are my favorite. Alfred Hitchcock, Sergio Leone, Steven Spielberg and Christopher Nolan films always attracted me. Movies have great appeal and unlike written stories always get noticed easily. No on knew my story “Vincent Van Gogh meets Death” whereas Death Offers Life got me to New York Glamour Magazine.

NY Glam: What are you currently working on?
I am in the workshop of a short movie in which Charles Chaplin stars. The dialogues are almost set and may be written any time. It’s something about motherhood.

NY Glam: What were your main responsibilities on this film?
I am the writer as well as the producer.

NY Glam: Can you tell us about your experience in working with the director and actors in this film?
I not only gave my script and money to Saheer Abbas the director of the movie but also full freedom. He turned my story into an excellent movie. The cast were his selection and both Rashin Khan as Van Gogh and Anuroop Thekkumkadan as Death were perfect choices. The entire crew was the director’s choice.

NY Glam: What was the most important thing for this movie to achieve from a narrative and character standpoint?
Viewers were particularly attracted by the reply Van Gogh gave to Death rejecting the offer. A festival in Serbia noted that the idea came out of the Hindu philosophy. Most of the viewers accepted the notion that the artist should get recognition during his lifetime itself.

NY Glam: What other films have you produced?
This is the only film I have produced.

NY Glam: What makes a film interesting for you? What are three qualities that you look for in a movie?
A film should be thrilling, making us wait for the next moment even if it is a drama. The concept should be attractive, next is camera work and thirdly the background score.

NY Glam: What project helped you launch your career?Death Offers Life launched my career. With over 500 official selections and 297 awards till date we are on a roll. I am waiting for a call from the industry and hopefully it may come
one day.

NY Glam: As a screenwriter, what is the most important aspect of building a character?
A character makes himself felt through dialogues. I always concentrate on this aspect. The right words should come from the characters to leave an everlasting impact on the viewer.

NY Glam: What are your ambitions for your writing career?
I have ideas and many concepts. I want to be a known screenwriter. If I have money I would be producing my own screenplays where I get full freedom to get my ideas to come to screen.

NY Glam: What are you most proud of? Describe your biggest accomplishment to date?
I had received a letter from Dr. A.P.J. Abdul Kalam, a nuclear scientist, when he was the President of India appreciating my poem “Mother” published in my book “A Sweating Mind”. This has given me fuel for many miles in writing.

NY Glam: Do you have any upcoming projects that you’re super excited about?
I do not have projects for now due to financial constraints. I am hopefully waiting for a chance where a producer/director would find me.

NY Glam: What advice would you give to someone who is aspiring to enter the film industry, especially as a producer?
A producer should make projects with global appeal. Death Offers Life is the best example portraying the world famous painter Van Gogh. Most viewers liked the film or the theme.

NY Glam: Can you discuss any future projects or direction you are taking in regard to filmmaking?

As of now I have no projects. As mentioned above a story about Charles Chaplin is in the offing.

Interview With the Vampire at (AMC)

0
The basic cable network is ready to sink its teeth into Anne Rice’s beloved vampire world, with Interview the first of what...
Read more
Art